If you click on this map, it will come up more clearly for you to read more easily.

Click  HERE for a preview of Paul’s second missionary journey!

1 Paul went first to Derbe and then to Lystra, where there was a young disciple named Timothy. His mother was a Jewish believer, but his father was a Greek.

Remember Lystra?  First, the people there thought Paul was a god and tried to offer sacrifices to him.  Then they tried to stone him to death.  Had Timothy and his mother seen Paul’s strong witness for Christ in those very events?  Timothy will become one of Paul’s close co-workers and the recipient of two of Paul’s letters.

2 Timothy was well thought of by the believers in Lystra and Iconium, 3 so Paul wanted him to join them on their journey.

Barnabas and John Mark had just left Paul — and God provided another companion for him in Timothy.  When God calls people to his work, he also provides for their needs in that work.  “The Lord is my shepherd; I shall not want.”

In deference to the Jews of the area, he arranged for Timothy to be circumcised before they left, for everyone knew that his father was a Greek.

Paul has Timothy circumcised not for his salvation, but for the sake of ministering unhindered among the Jews.

4 Then they went from town to town, instructing the believers to follow the decisions made by the apostles and elders in Jerusalem. 5 So the churches were strengthened in their faith and grew larger every day.

A Call from Macedonia

6 Next Paul and Silas traveled through the area of Phrygia and Galatia, because the Holy Spirit had prevented them from preaching the word in the province of Asia at that time.

Asia in New Testament times does not mean China and Japan!  It means the Roman province of Asia Minor, which is present-day Turkey.

7 Then coming to the borders of Mysia, they headed north for the province of Bithynia, but again the Spirit of Jesus did not allow them to go there. 8 So instead, they went on through Mysia to the seaport of Troas.

Paul is being guided by hindrance.  The Holy Spirit often guides as much by the closing of doors as He does by the opening of doors.
—David Guzik

9 That night Paul had a vision: A man from Macedonia in northern Greece was standing there, pleading with him, “Come over to Macedonia and help us!” 10 So we decided to leave for Macedonia at once, having concluded that God was calling us to preach the Good News there.

Notice the shift in pronouns, from they in verse 8 to we in verse 10?  Perhaps here is where Luke joined Paul on the trip.

Lydia of Philippi Believes in Jesus

11 We boarded a boat at Troas and sailed straight across to the island of Samothrace, 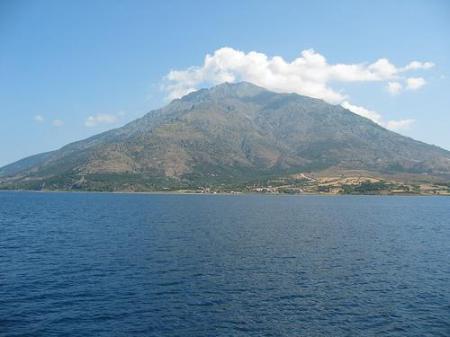 “The ferocious sea god, Poseidon, is portrayed in Homer’s Iliad as sitting on a mountain crag of Samothrace watching two armies clash on the mainland, watching Troy fall.

“Samothrace is a small, mountainous island.  One of its peaks soars well over 5,000 feet into the air.  Paul caught a good wind to make the island in a day.”

and the next day we landed at Neapolis. 12 From there we reached Philippi, a major city of that district of Macedonia and a Roman colony. And we stayed there several days.

Paul had had in mind more cities for Christ, but God wanted a whole continent!  So Paul brought the gospel to Europe.  It started in Greece and went on to Rome.  Eventually the Good News made it all the way to Norway, where my ancestors learned they could leave their sins at the foot of the cross and walk through life with Jesus.  I am so grateful to Paul for paving the way for the gospel to come to my family!

13 On the Sabbath we went a little way outside the city to a riverbank, where we thought people would be meeting for prayer, and we sat down to speak with some women who had gathered there.

This is a small Jewish community, for had there been ten men, they would have had a synagogue.

14 One of them was Lydia from Thyatira, a merchant of expensive purple cloth, who worshiped God.

Purple cloth was a luxurious, high-end product, and Thyatira was a center for the dye and the cloth.  Later a church was established at Thyatira, for one of the letters in Revelation is addressed here (Rev. 2:18-29).

As she listened to us, the Lord opened her heart, and she accepted what Paul was saying. 15 She was baptized along with other members of her household, and she asked us to be her guests. “If you agree that I am a true believer in the Lord,” she said, “come and stay at my home.” And she urged us until we agreed.

Such openness of heart towards the Lord led her to open her home to Paul and his group.  Lydia understood the value of hospitality!

Paul and Silas in Prison

16 One day as we were going down to the place of prayer, we met a demon-possessed slave girl. She was a fortune-teller who earned a lot of money for her masters. 17 She followed Paul and the rest of us, shouting, “These men are servants of the Most High God, and they have come to tell you how to be saved.”

18 This went on day after day until Paul got so exasperated that he turned and said to the demon within her, “I command you in the name of Jesus Christ to come out of her.” And instantly it left her.

Paul, like Jesus, does not need or want demons testifying on his behalf.  Jesus, also, told demons who were proclaiming His name to be silent (as in Matthew 8:28-34).

19 Her masters’ hopes of wealth were now shattered, so they grabbed Paul and Silas and dragged them before the authorities at the marketplace. 20 “The whole city is in an uproar because of these Jews!” they shouted to the city officials.

Paul and Silas were Jews, of course.  Luke was Greek, and Timothy only half-Jewish.  It was easy enough to blame “these Jews!”

21 “They are teaching customs that are illegal for us Romans to practice.”

22 A mob quickly formed against Paul and Silas, and the city officials ordered them stripped and beaten with wooden rods. 23 They were severely beaten, and then they were thrown into prison. The jailer was ordered to make sure they didn’t escape. 24 So the jailer put them into the inner dungeon and clamped their feet in the stocks.

25 Around midnight Paul and Silas were praying and singing hymns to God,

Given the same situation, would I respond so faithfully?

and the other prisoners were listening. 26 Suddenly, there was a massive earthquake, and the prison was shaken to its foundations. All the doors immediately flew open, and the chains of every prisoner fell off! 27 The jailer woke up to see the prison doors wide open. He assumed the prisoners had escaped, so he drew his sword to kill himself. 28 But Paul shouted to him, “Stop! Don’t kill yourself! We are all here!”

In not escaping, they showed tremendous discernment. The circumstances said, “escape.” But love said, “Stay for the sake of this one soul.” They were not guided merely by circumstances, but by what love compelled.
—David Guzik

29 The jailer called for lights and ran to the dungeon and fell down trembling before Paul and Silas. 30 Then he brought them out and asked, “Sirs, what must I do to be saved?”

31 They replied, “Believe in the Lord Jesus and you will be saved, along with everyone in your household.” 32 And they shared the word of the Lord with him and with all who lived in his household. 33 Even at that hour of the night, the jailer cared for them and washed their wounds. Then he and everyone in his household were immediately baptized. 34 He brought them into his house and set a meal before them, and he and his entire household rejoiced because they all believed in God.

37 But Paul replied, “They have publicly beaten us without a trial and put us in prison—and we are Roman citizens. So now they want us to leave secretly? Certainly not! Let them come themselves to release us!”

Roman citizens had specific and zealously guarded civil rights.  They were entitled to a trial, and were not to be flogged.  Paul did not get a trial, and he was beaten.  He knows this information of his Roman citizenship is game-changing.

38 When the police reported this, the city officials were alarmed to learn that Paul and Silas were Roman citizens. 39 So they came to the jail and apologized to them. Then they brought them out and begged them to leave the city. 40 When Paul and Silas left the prison, they returned to the home of Lydia. There they met with the believers and encouraged them once more. Then they left town.

The Lord set them free!

John 13:7 — Jesus answered and said unto him, What I do thou knowest not now; but thou shalt know hereafter.

Matthew 5:11 — Blessed are ye, when men shall revile you, and persecute you, and shall say all manner of evil against you falsely, for My sake.

In Acts 16 we read how Paul was forbidden by the Holy Spirit to go to preach the word in Asia (verse 6) and in Bithynia (verse 7), but had a vision of a man saying, Come over to Macedonia, and help us. And immediately they set out, assuredly gathering that the Lord had called us for to preach the gospel unto them (verse 9-10).

The result was bad trouble; they were beaten, cast into prison, and put in the stocks.  It must have been very perplexing for them.

To the questions that come about things we know the Lord does (verses 6 and 7), the answer of peace is found in John 13:7.  To the opposite kind of question, about things the devil does (verse 20 onwards), we have Matthew 5:11.

This distinction holds good every time.  In this one chapter of Acts we have opportunities for both kinds of questions, exactly as in one short period of life we may find ourselves faced with both.

But there is always peace in these two answers.  They explain nothing, but they still the heart and lead it into quietness.

That is why at midnight Paul and Silas were able to sing praises to God; and we know what happened after that.

Charles Wesley’s beloved hymn, “And Can It Be (Amazing Love),” sung by the Altar of Praise Chorale.  With thanks to my friend Carole!

This entry was posted on Monday, January 24th, 2011 at 2:00 AM and is filed under Bible. You can follow any responses to this entry through the RSS 2.0 feed. You can leave a response, or trackback from your own site.