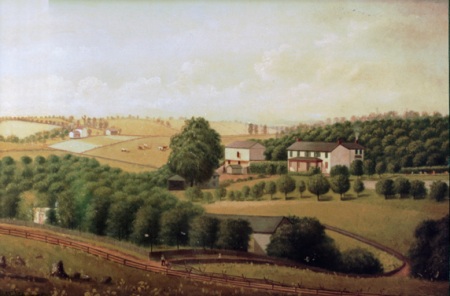 1 Now Elisha had said to the woman whose son he had restored to life, “Go away with your family and stay for a while wherever you can, because the LORD has decreed a famine in the land that will last seven years.” 2 The woman proceeded to do as the man of God said. She and her family went away and stayed in the land of the Philistines seven years.

3 At the end of the seven years she came back from the land of the Philistines and went to appeal to the king for her house and land. 4 The king was talking to Gehazi, the servant of the man of God, and had said, “Tell me about all the great things Elisha has done.”

Some Bible commentators believe that this event may have happened before the events of chapter 5 and Gehazi contracting leprosy; other commentators wonder if perhaps Gehazi had been healed.

5 Just as Gehazi was telling the king how Elisha had restored the dead to life, the woman whose son Elisha had brought back to life came to appeal to the king for her house and land.

Gehazi said, “This is the woman, my lord the king, and this is her son whom Elisha restored to life.” 6 The king asked the woman about it, and she told him.

Then he assigned an official to her case and said to him, “Give back everything that belonged to her, including all the income from her land from the day she left the country until now.”

So the family farm can stay in the family.  As an Iowa farm girl myself, I am glad!

“God Will Take Care of You.”  I can remember my mother singing this sweet song as she worked in the kitchen or the garden.  Here it is sung by Plumb (real name Tiffany Lee), a Christian music artist from Nashville.

7 Elisha went to Damascus, and Ben-Hadad king of Aram was ill. When the king was told, “The man of God has come all the way up here,” 8 he said to Hazael, “Take a gift with you and go to meet the man of God. Consult the LORD through him; ask him, ‘Will I recover from this illness?’”

9 Hazael went to meet Elisha, taking with him as a gift forty camel-loads of all the finest wares of Damascus. He went in and stood before him, and said, “Your son Ben-Hadad king of Aram has sent me to ask, ‘Will I recover from this illness?’”

10 Elisha answered, “Go and say to him, ‘You will certainly recover.’ Nevertheless, the LORD has revealed to me that he will in fact die.” 11 He stared at him with a fixed gaze until Hazael was embarrassed. Then the man of God began to weep.

“Because I know the harm you will do to the Israelites,” he answered. “You will set fire to their fortified places, kill their young men with the sword, dash their little children to the ground, and rip open their pregnant women.”

13 Hazael said, “How could your servant, a mere dog, accomplish such a feat?”

How our perverse pride assists us in underestimating the evil we are capable of!

“The LORD has shown me that you will become king of Aram,” answered Elisha.

14 Then Hazael left Elisha and returned to his master. When Ben-Hadad asked, “What did Elisha say to you?” Hazael replied, “He told me that you would certainly recover.” 15 But the next day he took a thick cloth, soaked it in water and spread it over the king’s face, so that he died. Then Hazael succeeded him as king.

King Jehoram of Judah lost some of his borderlands because he followed the evil ways of the kings of Israel.

16 In the fifth year of Joram son of Ahab king of Israel, when Jehoshaphat was king of Judah, Jehoram son of Jehoshaphat began his reign as king of Judah. 17 He was thirty-two years old when he became king, and he reigned in Jerusalem eight years. 18 He followed the ways of the kings of Israel, as the house of Ahab had done, for he married a daughter of Ahab. He did evil in the eyes of the LORD. 19 Nevertheless, for the sake of his servant David, the LORD was not willing to destroy Judah. He had promised to maintain a lamp for David and his descendants forever.

20 In the time of Jehoram, Edom rebelled against Judah and set up its own king. 21 So Jehoram went to Zair with all his chariots. The Edomites surrounded him and his chariot commanders, but he rose up and broke through by night; his army, however, fled back home. 22 To this day Edom has been in rebellion against Judah. Libnah revolted at the same time.

23 As for the other events of Jehoram’s reign, and all he did, are they not written in the book of the annals of the kings of Judah? 24 Jehoram rested with his ancestors and was buried with them in the City of David. And Ahaziah his son succeeded him as king.

25 In the twelfth year of Joram son of Ahab king of Israel, Ahaziah son of Jehoram king of Judah began to reign. 26 Ahaziah was twenty-two years old when he became king, and he reigned in Jerusalem one year. His mother’s name was Athaliah, a granddaughter of Omri king of Israel. 27 He followed the ways of the house of Ahab and did evil in the eyes of the LORD, as the house of Ahab had done, for he was related by marriage to Ahab’s family.

Do not be unequally yoked with unbelievers. For what partnership has righteousness with lawlessness? Or what fellowship has light with darkness?

Then Ahaziah son of Jehoram king of Judah went down to Jezreel to see Joram son of Ahab, because he had been wounded.

This entry was posted on Wednesday, February 23rd, 2011 at 2:00 AM and is filed under Bible. You can follow any responses to this entry through the RSS 2.0 feed. You can leave a response, or trackback from your own site.