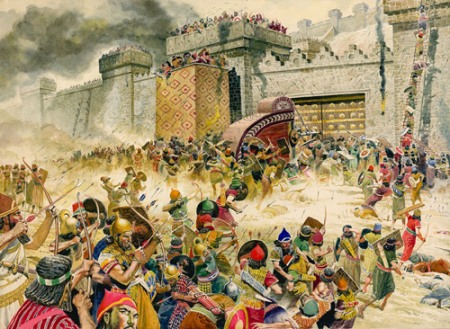 1 In the twelfth year of Ahaz king of Judah, Hoshea son of Elah became king of Israel in Samaria, and he reigned nine years. 2 He did evil in the eyes of the LORD, but not like the kings of Israel who preceded him.

Hoshea thought he had a strategic opportunity when a new king came to the Assyrian throne, but he was wrong. “When Tiglath-pileser III died in 727 b.c. and was succeeded by his own son Shalmaneser V (727-722), the time seemed ripe for certain western states to renounce their vassal status. Moreover, a seemingly important ally lay southward in the delta of Egypt.” (Patterson and Austel)
–David Guzik

Therefore Shalmaneser seized him and put him in prison. 5 The king of Assyria invaded the entire land, marched against Samaria and laid siege to it for three years. 6 In the ninth year of Hoshea, the king of Assyria captured Samaria and deported the Israelites to Assyria. He settled them in Halah, in Gozan on the Habor River and in the towns of the Medes.

Judgment has come, some 200 years and 19 kings after the division of Solomon’s kingdom.  The Northern Kingdom, who for all of its history followed the idolatry of Jereboam-who-made-Israel-to-sin, at last reaps the bitter harvest.  The Assyrians deported most of the people, scattering them throughout their large empire so as not to have to deal with any efforts at uprising.  The defeat was humiliating and the deportation was painful:  the Assyrians marched the deportees out of the city attached together with a system of strings and fishhooks pierced through their lower lip.  Amos had warned them:

The Lord GOD has sworn by his holiness
that, behold, the days are coming upon you,
when they shall take you away with hooks,
even the last of you with fishhooks.
And you shall go out through the breaches,
each one straight ahead;
and you shall be cast out into Harmon,”

Israel Exiled Because of Sin

The rest of this chapter shows why God allowed this calamity to happen.  It was not for lack of love for His people, for, as my Old Testament professor at Wheaton College often said, “Mercy precedes judgment.”  It was rather that their hearts had become so hard and their sin so great that justice was required.

7 All this took place because the Israelites had sinned against the LORD their God, who had brought them up out of Egypt from under the power of Pharaoh king of Egypt. They worshiped other gods 8 and followed the practices of the nations the LORD had driven out before them, as well as the practices that the kings of Israel had introduced. 9 The Israelites secretly did things against the LORD their God that were not right. From watchtower to fortified city they built themselves high places in all their towns. 10 They set up sacred stones and Asherah poles on every high hill and under every spreading tree. 11 At every high place they burned incense, as the nations whom the LORD had driven out before them had done. They did wicked things that aroused the LORD’s anger. 12 They worshiped idols, though the LORD had said, “You shall not do this.”

Then God gave the people all these instructions:

“I am the Lord your God, who rescued you from the land of Egypt, the place of your slavery.
“You must not have any other god but me.”

13 The LORD warned Israel and Judah through all his prophets and seers: “Turn from your evil ways. Observe my commands and decrees, in accordance with the entire Law that I commanded your ancestors to obey and that I delivered to you through my servants the prophets.”

14 But they would not listen and were as stiff-necked as their ancestors, who did not trust in the LORD their God. 15 They rejected his decrees and the covenant he had made with their ancestors and the statutes he had warned them to keep. They followed worthless idols and themselves became worthless.

We will be that which we follow.  It does not matter where we are, or what work we are doing.  What we follow, that we will become.  Follow what is worthless, and we become worthless.  Follow truth, love, righteousness, faithfulness, and we will become true, loving, right-living, and faithful.  Each one of us has a choice.

Choose you this day (Joshua 24:15), for every day we live we become more and more like that which we choose to follow.

“I Have Decided to Follow Jesus”  updated a bit by the Aaron Pelsue Band (based in Indianapolis).

They imitated the nations around them although the LORD had ordered them, “Do not do as they do.”

16 They forsook all the commands of the LORD their God and made for themselves two idols cast in the shape of calves, and an Asherah pole. They bowed down to all the starry hosts, and they worshiped Baal. 17 They sacrificed their sons and daughters in the fire. They practiced divination and sought omens and sold themselves to do evil in the eyes of the LORD, arousing his anger.

18 So the LORD was very angry with Israel and removed them from his presence. Only the tribe of Judah was left, 19 and even Judah did not keep the commands of the LORD their God. They followed the practices Israel had introduced. 20 Therefore the LORD rejected all the people of Israel; he afflicted them and gave them into the hands of plunderers, until he thrust them from his presence.

21 When he tore Israel away from the house of David, they made Jeroboam son of Nebat their king. Jeroboam enticed Israel away from following the LORD and caused them to commit a great sin. 22 The Israelites persisted in all the sins of Jeroboam and did not turn away from them 23 until the LORD removed them from his presence, as he had warned through all his servants the prophets. So the people of Israel were taken from their homeland into exile in Assyria, and they are still there.

Speculation has abounded for centuries as to what happened to the Ten Lost Tribes, and various persons have made claims that their people-group is a descendant of the Ten Lost Tribes:  the Pashtuns of Afghanistan, the British, the Kurds, the Japanese, the Irish, the American Indians, the Latter Day Saints . . . 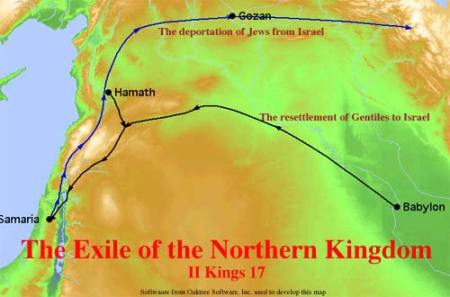 Jews led out — Gentiles sent in

24 The king of Assyria brought people from Babylon, Kuthah, Avva, Hamath and Sepharvaim and settled them in the towns of Samaria to replace the Israelites. They took over Samaria and lived in its towns. 25 When they first lived there, they did not worship the LORD; so he sent lions among them and they killed some of the people. 26 It was reported to the king of Assyria: “The people you deported and resettled in the towns of Samaria do not know what the god of that country requires. He has sent lions among them, which are killing them off, because the people do not know what he requires.”

Well, sort of . . . What did the priests of the Northern Kingdom really know about the worship of the One True God?

29 Nevertheless, each national group made its own gods in the several towns where they settled, and set them up in the shrines the people of Samaria had made at the high places. 30 The people from Babylon made Sukkoth Benoth, those from Kuthah made Nergal, and those from Hamath made Ashima; 31 the Avvites made Nibhaz and Tartak, and the Sepharvites burned their children in the fire as sacrifices to Adrammelek and Anammelek, the gods of Sepharvaim. 32 They worshiped the LORD, but they also appointed all sorts of their own people to officiate for them as priests in the shrines at the high places. 33 They worshiped the LORD, but they also served their own gods in accordance with the customs of the nations from which they had been brought.

34 To this day they persist in their former practices. They neither worship the LORD nor adhere to the decrees and regulations, the laws and commands that the LORD gave the descendants of Jacob, whom he named Israel. 35 When the LORD made a covenant with the Israelites, he commanded them: “Do not worship any other gods or bow down to them, serve them or sacrifice to them. 36 But the LORD, who brought you up out of Egypt with mighty power and outstretched arm, is the one you must worship. To him you shall bow down and to him offer sacrifices. 37 You must always be careful to keep the decrees and regulations, the laws and commands he wrote for you. Do not worship other gods. 38 Do not forget the covenant I have made with you, and do not worship other gods. 39 Rather, worship the LORD your God; it is he who will deliver you from the hand of all your enemies.”

40 They would not listen, however, but persisted in their former practices. 41 Even while these people were worshiping the LORD, they were serving their idols. To this day their children and grandchildren continue to do as their ancestors did. 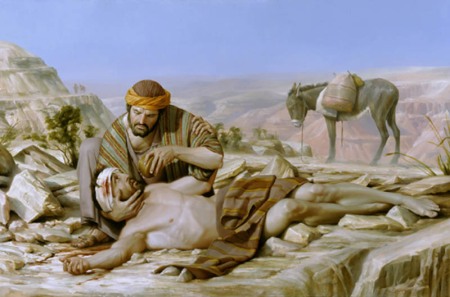 The Samaritans continued well into New Testament times, despised by the Gentiles for being part Jewish and by the Jews for being part Gentile.  But Jesus never treated the Samaritans in a demeaning manner.  The first person to whom He said clearly, “I am the Messiah” was the Samaritan woman at the well (John 4).  And when a Jewish lawyer asked Jesus, “Who is my neighbor?” — Jesus answered by telling the story of the Good Samaritan (Luke 10).

tablets (Charleton Heston used these in the movie The Ten Commandments).    http://media.katu.com/images/080515_Heston_tablets.jpg

This entry was posted on Tuesday, March 8th, 2011 at 2:00 AM and is filed under Bible. You can follow any responses to this entry through the RSS 2.0 feed. You can leave a response, or trackback from your own site.