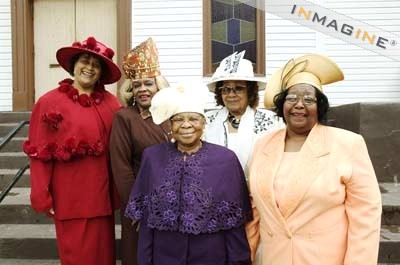 There is a long-time tradition of head adornment in the black religious community. While it may have started with the biblical admonition from the Apostle Paul that a woman must cover her head before entering a house of worship, over time it has become a fashion statement and a cultural celebration.  And aren’t these ladies beautiful?

Be an example to all believers in what you say, in the way you live, in your love, your faith, and your purity.

On Covering the Head in Worship

2 I praise you for remembering me in everything and for holding to the traditions just as I passed them on to you. 3 But I want you to realize that the head of every man is Christ, and the head of the woman is man, and the head of Christ is God.

This section of Paul has caused much confusion, and I do not suggest that I could give you the definitive interpretation!  But several commentaries state that the Greek word here translated “head” could also mean “source.”  In that case, Paul is saying that woman derives her being from man (as in the creation story of Genesis 2:21-22), as man does from Christ, and Christ does from God.  Each of those relationships is somewhat different from the other, but the order of creation does seem, to Paul, to have consequences for worship.

4 Every man who prays or prophesies with his head covered dishonors his head. 5 But every woman who prays or prophesies with her head uncovered dishonors her head—it is the same as having her head shaved. 6For if a woman does not cover her head, she might as well have her hair cut off; but if it is a disgrace for a woman to have her hair cut off or her head shaved, then she should cover her head. 7 A man ought not to cover his head, since he is the image and glory of God; but woman is the glory of man. 8 For man did not come from woman, but woman from man; 9 neither was man created for woman, but woman for man. 10 It is for this reason that a woman ought to have authority over her own head, because of the angels. 11 Nevertheless, in the Lord woman is not independent of man, nor is man independent of woman. 12 For as woman came from man, so also man is born of woman. But everything comes from God.

13 Judge for yourselves: Is it proper for a woman to pray to God with her head uncovered? 14 Does not the very nature of things teach you that if a man has long hair, it is a disgrace to him, 15 but that if a woman has long hair, it is her glory? For long hair is given to her as a covering. 16 If anyone wants to be contentious about this, we have no other practice—nor do the churches of God.

Regarding head covering and hair length:

Paul’s arguments here are closely related to a specific historical situation and an evaluation of cultural appropriateness.  We should be cautious about applying all these details universally.

Correcting an Abuse of the Lord’s Supper 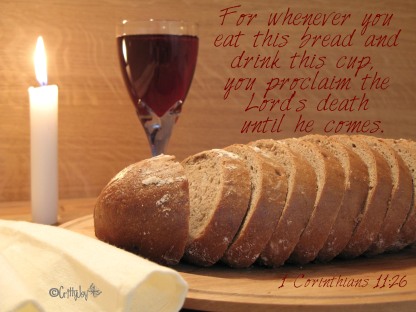 17 In the following directives I have no praise for you, for your meetings do more harm than good. 18 In the first place, I hear that when you come together as a church, there are divisions among you, and to some extent I believe it. 19 No doubt there have to be differences among you to show which of you have God’s approval. 20 So then, when you come together, it is not the Lord’s Supper you eat, 21 for when you are eating, some of you go ahead with your own private suppers. As a result, one person remains hungry and another gets drunk.

Another point that Paul addresses here has to do with the lack of unity among the believers at the Lord’s Supper.  Some have plenty to eat and drink, yet do not share with those who do not.  The rich are not caring for the poor.  Such selfish conduct was disgraceful to the body of Christ as well as to Christ.

22Don’t you have homes to eat and drink in? Or do you despise the church of God by humiliating those who have nothing? What shall I say to you? Shall I praise you? Certainly not in this matter! 23 For I received from the Lord what I also passed on to you: The Lord Jesus, on the night he was betrayed, took bread, 24 and when he had given thanks,

In theology, and in church custom, the Lord’s Supper is often called the eucharist.  This word comes from the Greek phrase used here for “given thanks.”

There is a very clear connection between preaching the gospel and celebrating the Lord’s Supper.  The meal sets forth God’s Word through visible rather than verbal means.  When we “eat this bread and drink this cup,” we are giving expression to our faith in the death and resurrection of Jesus and our sure hope of his return.

27 So then, whoever eats the bread or drinks the cup of the Lord in an unworthy manner will be guilty of sinning against the body and blood of the Lord. 28 Everyone ought to examine themselves before they eat of the bread and drink from the cup. 29 For those who eat and drink without discerning the body of Christ eat and drink judgment on themselves. 30 That is why many among you are weak and sick, and a number of you have fallen asleep. 31 But if we were more discerning with regard to ourselves, we would not come under such judgment. 32 Nevertheless, when we are judged in this way by the Lord, we are being disciplined so that we will not be finally condemned with the world.

33 So then, my brothers and sisters, when you gather to eat, you should all eat together. 34 Anyone who is hungry should eat something at home, so that when you meet together it may not result in judgment.

And when I come I will give further directions.

“Come, Now Is the Time to Worship.”  Let us “gladly choose him now,” and not worry about our hair or our hats, or anything other than our hearts . . .

This entry was posted on Tuesday, May 22nd, 2012 at 2:00 AM and is filed under Bible. You can follow any responses to this entry through the RSS 2.0 feed. You can leave a response, or trackback from your own site.