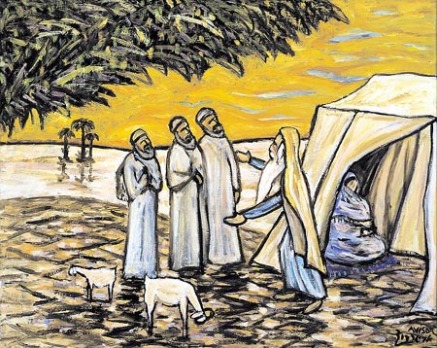 A Son Promised to Abraham and Sarah

The Lord appeared to Abraham by the oaks of Mamre, as he sat at the entrance of his tent in the heat of the day. 2He looked up and saw three men standing near him. When he saw them, he ran from the tent entrance to meet them, and bowed down to the ground.

3He said, “My lord, if I find favor with you, do not pass by your servant. 4Let a little water be brought, and wash your feet, and rest yourselves under the tree. 5Let me bring a little bread, that you may refresh yourselves, and after that you may pass on—since you have come to your servant.”

As Abraham did before the angels, so we also bow down before the Lord.  “We Bow Down,” written by Viola Grafstrom.

6And Abraham hastened into the tent to Sarah, and said, “Make ready quickly three measures of choice flour, knead it, and make cakes.”

Yes, Sara(h) was well-known for her delicious little cakes!

7Abraham ran to the herd, and took a calf, tender and good, and gave it to the servant, who hastened to prepare it. 8Then he took curds and milk and the calf that he had prepared, and set it before them; and he stood by them under the tree while they ate.

Do not neglect to show hospitality to strangers, for by this some have entertained angels without knowing it.

“Entertaining Angels”  by the Australian Christian pop rock band Newsboys, released in 1998 and a big hit.

9They said to him, “Where is your wife Sarah?”

10Then one said, “I will surely return to you in due season, and your wife Sarah shall have a son.”

And Sarah was listening at the tent entrance behind him. 11Now Abraham and Sarah were old, advanced in age; it had ceased to be with Sarah after the manner of women. 12So Sarah laughed to herself, saying, “After I have grown old, and my husband is old, shall I have pleasure?”

13The Lord said to Abraham, “Why did Sarah laugh, and say, ‘Shall I indeed bear a child, now that I am old?’ 14Is anything too wonderful for the Lord? At the set time I will return to you, in due season, and Sarah shall have a son.”

15But Sarah denied, saying, “I did not laugh”; for she was afraid.

If we are faithless, he remains faithful—

for he cannot deny himself.

16Then the men set out from there, and they looked toward Sodom; and Abraham went with them to set them on their way. 17The Lord said, “Shall I hide from Abraham what I am about to do, 18seeing that Abraham shall become a great and mighty nation, and all the nations of the earth shall be blessed in him? 19No, for I have chosen him, that he may charge his children and his household after him to keep the way of the Lord by doing righteousness and justice; so that the Lord may bring about for Abraham what he has promised him.”

20Then the Lord said, “How great is the outcry against Sodom and Gomorrah and how very grave their sin! 21I must go down and see whether they have done altogether according to the outcry that has come to me; and if not, I will know.” 22So the men turned from there, and went toward Sodom, while Abraham remained standing before the Lord.

“Will not the Judge of all the earth do right?”  This verse often comes to me when I ponder the impossible things of life — children being abused in horrible ways, mothers dying and leaving young kids behind, wicked persons succeeding while the righteous suffer, and endlessly on and on in our broken world.  This verse brings comfort:  God will make things right in the end.  He will do what is right for all involved.

26And the Lord said, “If I find at Sodom fifty righteous in the city, I will forgive the whole place for their sake.”

Once the principle is established — God will not destroy the righteous with the wicked — now it is just a matter of numbers. How many righteous people will God spare the city for?

This reminds me of an old joke:

27Abraham answered, “Let me take it upon myself to speak to the Lord, I who am but dust and ashes. 28Suppose five of the fifty righteous are lacking? Will you destroy the whole city for lack of five?”

And he said, “I will not destroy it if I find forty-five there.”

29Again he spoke to him, “Suppose forty are found there.”

He answered, “For the sake of forty I will not do it.”

30Then he said, “Oh do not let the Lord be angry if I speak. Suppose thirty are found there.”

I love that Abraham never asks the Lord “Why?” or demands that the Lord explain himself or his actions.

He answered, “I will not do it, if I find thirty there.”

31He said, “Let me take it upon myself to speak to the Lord. Suppose twenty are found there.”

He answered, “For the sake of twenty I will not destroy it.”

32Then he said, “Oh do not let the Lord be angry if I speak just once more. Suppose ten are found there.”

He answered, “For the sake of ten I will not destroy it.” 33And the Lord went his way, when he had finished speaking to Abraham; and Abraham returned to his place.

In this study we see the contrast between the second perfect man Jesus and the first man, Adam. Jesus is the new Adam and by his power of grace he is able to bring about changes in us. We can become a new creation in Jesus. Click here for AUDIO or VIDEO.

Sodom in black and white.  http://sewhttkr.home.comcast.net/~sewhttkr/bibleWS/bibleWS/12_sodom1.gif

This entry was posted on Thursday, June 28th, 2012 at 2:00 AM and is filed under Bible. You can follow any responses to this entry through the RSS 2.0 feed. You can leave a response, or trackback from your own site.