The royal butler forgot about Joseph, and Joseph remained  in prison for two more years.  What good was God building into Joseph’s soul during this long wait?  During the times we think God isn’t doing anything, He is doing the work most important to Him: developing our character and transforming us into the image of Jesus Christ.

5Then he fell asleep and dreamed a second time; seven ears of grain, plump and good, were growing on one stalk. 6Then seven ears, thin and blighted by the east wind, sprouted after them. 7The thin ears swallowed up the seven plump and full ears. Pharaoh awoke, and it was a dream. 8In the morning his spirit was troubled; so he sent and called for all the magicians of Egypt and all its wise men. Pharaoh told them his dreams, but there was no one who could interpret them to Pharaoh.

9Then the chief cupbearer said to Pharaoh, “I remember my faults today. 10Once Pharaoh was angry with his servants, and put me and the chief baker in custody in the house of the captain of the guard. 11We dreamed on the same night, he and I, each having a dream with its own meaning. 12A young Hebrew was there with us, a servant of the captain of the guard. When we told him, he interpreted our dreams to us, giving an interpretation to each according to his dream. 13As he interpreted to us, so it turned out; I was restored to my office, and the baker was hanged.”

14Then Pharaoh sent for Joseph, and he was hurriedly brought out of the dungeon. When he had shaved himself and changed his clothes, he came in before Pharaoh. 15And Pharaoh said to Joseph, “I have had a dream, and there is no one who can interpret it. I have heard it said of you that when you hear a dream you can interpret it.”

16Joseph answered Pharaoh, “It is not I; God will give Pharaoh a favorable answer.”

To God be the glory!

cows grazing on the banks of the Nile

17Then Pharaoh said to Joseph, “In my dream I was standing on the banks of the Nile; 18and seven cows, fat and sleek, came up out of the Nile and fed in the reed grass. 19Then seven other cows came up after them, poor, very ugly, and thin. Never had I seen such ugly ones in all the land of Egypt. 20The thin and ugly cows ate up the first seven fat cows, 21but when they had eaten them no one would have known that they had done so, for they were still as ugly as before. Then I awoke.

22″I fell asleep a second time and I saw in my dream seven ears of grain, full and good, growing on one stalk, 23and seven ears, withered, thin, and blighted by the east wind, sprouting after them; 24and the thin ears swallowed up the seven good ears. But when I told it to the magicians, there was no one who could explain it to me.”

28It is as I told Pharaoh; God has shown to Pharaoh what he is about to do. 29There will come seven years of great plenty throughout all the land of Egypt. 30After them there will arise seven years of famine, and all the plenty will be forgotten in the land of Egypt; the famine will consume the land. 31The plenty will no longer be known in the land because of the famine that will follow, for it will be very grievous. 32And the doubling of Pharaoh’s dream means that the thing is fixed by God, and God will shortly bring it about.

33Now therefore let Pharaoh select a man who is discerning and wise, and set him over the land of Egypt. 34Let Pharaoh proceed to appoint overseers over the land, and take one-fifth of the produce of the land of Egypt during the seven plenteous years. 35Let them gather all the food of these good years that are coming, and lay up grain under the authority of Pharaoh for food in the cities, and let them keep it. 36That food shall be a reserve for the land against the seven years of famine that are to befall the land of Egypt, so that the land may not perish through the famine.”

Joseph shows both his boldness and his gift of administration. No responsible leader would present such news without also suggesting a plan to meet the coming crisis.

37The proposal pleased Pharaoh and all his servants. 38Pharaoh said to his servants, “Can we find anyone else like this—one in whom is the spirit of God?”

39So Pharaoh said to Joseph, “Since God has shown you all this, there is no one so discerning and wise as you. 40You shall be over my house, and all my people shall order themselves as you command; only with regard to the throne will I be greater than you.”

41And Pharaoh said to Joseph, “See, I have set you over all the land of Egypt.” 42Removing his signet ring from his hand, Pharaoh put it on Joseph’s hand; he arrayed him in garments of fine linen, and put a gold chain around his neck. 43He had him ride in the chariot of his second-in-command; and they cried out in front of him, “Bow the knee!” Thus he set him over all the land of Egypt.

44Moreover Pharaoh said to Joseph, “I am Pharaoh, and without your consent no one shall lift up hand or foot in all the land of Egypt.” 45Pharaoh gave Joseph the name Zaphenath-paneah; and he gave him Asenath daughter of Potiphera, priest of On, as his wife. Thus Joseph gained authority over the land of Egypt.

“Song of the King (Seven Fat Cows)” from Joseph and the Amazing Technicolor Dreamcoat.  If you have not seen this musical, get a copy — it is a lot of fun!

46Joseph was thirty years old when he entered the service of Pharaoh king of Egypt. And Joseph went out from the presence of Pharaoh, and went through all the land of Egypt. 47During the seven plenteous years the earth produced abundantly. 48He gathered up all the food of the seven years when there was plenty in the land of Egypt, and stored up food in the cities; he stored up in every city the food from the fields around it. 49So Joseph stored up grain in such abundance—like the sand of the sea—that he stopped measuring it; it was beyond measure.

50Before the years of famine came, Joseph had two sons, whom Asenath daughter of Potiphera, priest of On, bore to him. 51Joseph named the firstborn Manasseh, “For,” he said, “God has made me forget all my hardship and all my father’s house.” 52The second he named Ephraim, “For God has made me fruitful in the land of my misfortunes.”

We can’t be doubly fruitful until we are also forgetting. In his book The Great Divorce, C.S. Lewis described hell as a place where no one forgets anything, remembering every slight, every cruel exchange of words, every wrong ever done to them, and everybody is utterly unforgiving. But in heaven all these things are put away because all things have become new.

Joseph did not forget the faith of his fathers even though he rose to great glory in Egypt and had an Egyptian wife. As a sign of this, his children were given Hebrew names, not Egyptian names.

56And since the famine had spread over all the land, Joseph opened all the storehouses, and sold to the Egyptians, for the famine was severe in the land of Egypt. 57Moreover, all the world came to Joseph in Egypt to buy grain, because the famine became severe throughout the world. 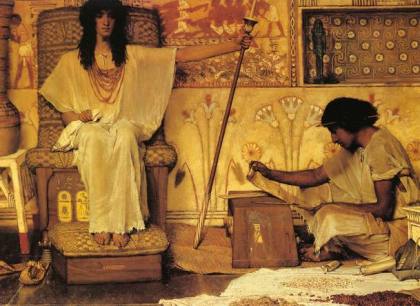 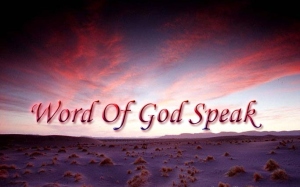 When something good happens to us in the church we want others to know.  We have a message to share.  The purpose of the new people of God is to tell others what Jesus has done for them. These people are witnesses to the good news they have seen and heard. Jesus has commanded the new people to go into all the world and bring everyone His message of good news.  Click here for AUDIO or VIDEO.

_________________________
The New Revised Standard Version, copyright 1989 by the Division of Christian Education of the National Council of the Churches of Christ in the United States of America. Used by permission. All rights reserved.

This entry was posted on Tuesday, July 31st, 2012 at 2:00 AM and is filed under Bible. You can follow any responses to this entry through the RSS 2.0 feed. You can leave a response, or trackback from your own site.