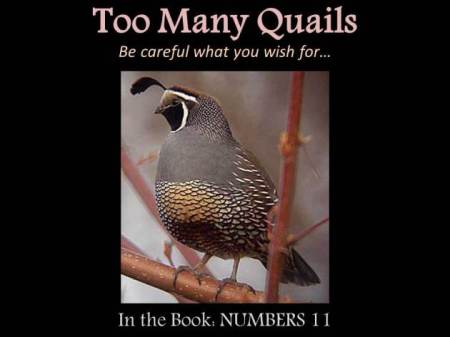 1One day the Israelites started complaining about their troubles. The LORD heard them and became so angry that he destroyed the outer edges of their camp with fire.

2When the people begged Moses to help, he prayed, and the fire went out. 3They named the place ” Burning,”  because in his anger the LORD had set their camp on fire.

“Dear Lord and Father of Mankind — forgive our foolish ways” — sung  HERE  by Katherine Jenkins to the British tune, Repton.

The People Grumble about Being Hungry

4One day some worthless foreigners among the Israelites became greedy for food, and even the Israelites themselves began moaning, “We don’t have any meat! 5In Egypt we could eat all the fish we wanted, and there were cucumbers, melons, onions, and garlic. 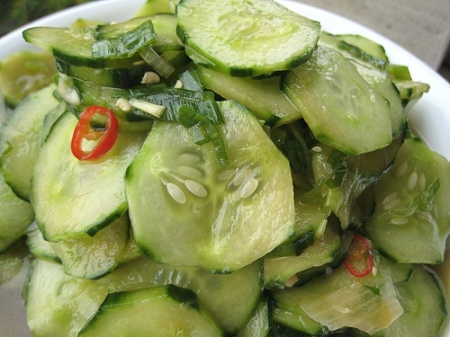 6But we’re starving out here, and the only food we have is this manna.”

The complaining heart romanticizes the past but it also exaggerates the problems of the present. Just how wonderful was life in Egypt, when they were slaves?  How can they be starving when they have manna every day?

7The manna was like small whitish seeds 8-9and tasted like something baked with sweet olive oil. It appeared at night with the dew. In the morning the people would collect the manna, grind or crush it into flour, then boil it and make it into thin wafers.

10The Israelites stood around their tents complaining.

Moses heard them and was upset that they had made the LORD angry. 11He prayed:

I am your servant, LORD, so why are you doing this to me? What have I done to deserve this? You’ve made me responsible for all these people, 12but they’re not my children. You told me to nurse them along and to carry them to the land you promised their ancestors. 13They keep whining for meat, but where can I get meat for them? 14This job is too much for me. How can I take care of all these people by myself? 15If this is the way you’re going to treat me, just kill me now and end my miserable life!

from Morning and Evening,
by Charles Haddon Spurgeon

Our heavenly Father sends us frequent troubles to try our faith.  If our faith be worth anything, it will stand the test.  It is a poor faith which can only trust God when friends are true, the body full of health, and the business profitable; but that is true faith which holds by the Lord’s faithfulness when friends are gone, when the body is sick, when spirits are depressed, and the light of our Father’s countenance is hidden.  A faith which can say, in the direst trouble, “Though He slay me, yet will I trust in Him,” is heaven-born faith.

The Lord afflicts His servants to glorify himself, for He is greatly glorified in the graces of His people, which are His own handiwork.  When “tribulation worketh patience; and patience, experience; and experience, hope,” the Lord is honored by these growing virtues.  We should never know the music of the harp if the strings were left untouched; nor enjoy the juice of the grape if it were not trodden in the wine-press; nor discover the sweet perfume of cinnamon if it were not pressed and beaten; nor feel the warmth of fire if the coals were not utterly consumed.  The wisdom and power of the great Workman are discovered by the trials through which His vessels of mercy are permitted to pass.

Present afflictions tend also to heighten future joy.  There must be shades in the picture to bring out the beauty of the light.  Could we be so supremely blessed in heaven, if we had not known the curse of sin and the sorrow of earth?  Will not peace be sweeter after conflict, and rest more welcome after toil?  Will not the recollection of past sufferings enhance the bliss of the glorified?  There are many other comfortable answers to the question with which we opened our brief meditation; let us muse upon it all day long.

Oh, my own heart!

16The LORD said to Moses:

Choose seventy of Israel’s respected leaders and go with them to the sacred tent. 17While I am talking with you there, I will give them some of your authority, so they can share responsibility for my people. You will no longer have to care for them by yourself.

The elders were there to help Moses carry the spiritual load — to help him care for and minister to the people, and to be a support for him in the ministry. God’s help was going to come to Moses through the support of godly men. This is a customary way for God to meet our needs.

18As for the Israelites, I have heard them complaining about not having meat and about being better off in Egypt. So tell them to make themselves acceptable to me, because tomorrow they will have meat. 19-20In fact, they will have meat day after day for a whole month–not just a few days, or even ten or twenty. They turned against me and wanted to return to Egypt. Now they will eat meat until they get sick of it.

21Moses replied, ” At least six hundred thousand grown men are here with me. How can you say there will be enough meat to feed them and their families for a whole month? 22Even if we butchered all of our sheep and cattle, or caught every fish in the sea, we wouldn’t have enough to feed them.”

23The LORD answered, ” I can do anything! Watch and you’ll see my words come true.”

24Moses told the people what the LORD had said. Then he chose seventy respected leaders and went with them to the sacred tent. While the leaders stood in a circle around the tent, Moses went inside, 25and the LORD spoke with him. Then the LORD took some authority  from Moses and gave it to the seventy leaders. And when the LORD’s Spirit took control of them, they started shouting like prophets. But they did it only this one time. 26Eldad and Medad were two leaders who had not gone to the tent. But when the Spirit took control of them, they began shouting like prophets right there in camp. 27A boy ran to Moses and told him about Eldad and Medad.

28Joshua  was there helping Moses, as he had done since he was young. And he said to Moses, ” Sir, you must stop them!” 29But Moses replied, ” Are you concerned what this might do to me? I wish the LORD would give his Spirit to all his people so everyone could be a prophet.” 30Then Moses and the seventy leaders went back to camp. 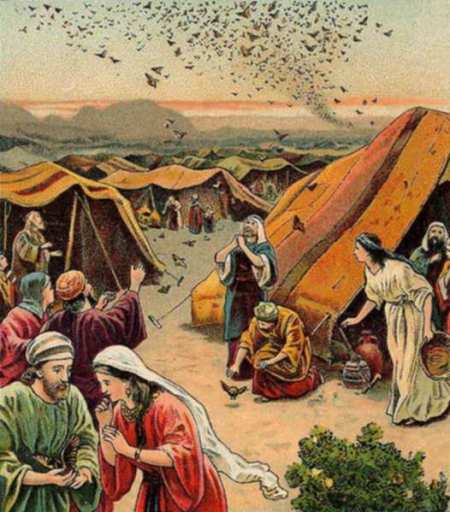 31Some time later the LORD sent a strong wind that blew quails in from the sea until Israel’s camp was completely surrounded with birds, piled up about three feet high for miles in every direction. 32The people picked up quails for two days–each person filled at least fifty bushels. Then they spread them out to dry. 33But before the meat could be eaten, the LORD became angry and sent a disease through the camp.

34After they had buried the people who had been so greedy for meat, they called the place ” Graves for the Greedy.”

A greedy man stirs up dissension,
but he who trusts in the LORD will prosper.

35Israel then broke camp and traveled to Hazeroth. 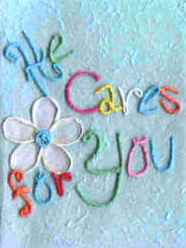 He spread out a cloud as a covering,
and a fire to give light at night.

They asked, and he brought them quail
and satisfied them with the bread of heaven.

He opened the rock, and water gushed out;
like a river it flowed in the desert.

This entry was posted on Monday, June 29th, 2015 at 2:00 AM and is filed under Bible. You can follow any responses to this entry through the RSS 2.0 feed. You can leave a response, or trackback from your own site.