The Gibeonites Save Themselves by Trickery

Now when all the kings who were beyond the Jordan in the hill country and in the lowland all along the coast of the Great Sea toward Lebanon—the Hittites, the Amorites, the Canaanites, the Perizzites, the Hivites, and the Jebusites—heard of this, 2they gathered together with one accord to fight Joshua and Israel.

3But when the inhabitants of Gibeon heard what Joshua had done to Jericho and to Ai, 4they on their part acted with cunning: they went and prepared provisions, and took worn-out sacks for their donkeys, and wineskins, worn-out and torn and mended, 5with worn-out, patched sandals on their feet, and worn-out clothes; and all their provisions were dry and moldy. 6They went to Joshua in the camp at Gilgal, and said to him and to the Israelites, “We have come from a far country; so now make a treaty with us.”

They act cleverly, deceptively, with props and lies . . .

7But the Israelites said to the Hivites, “Perhaps you live among us; then how can we make a treaty with you?” 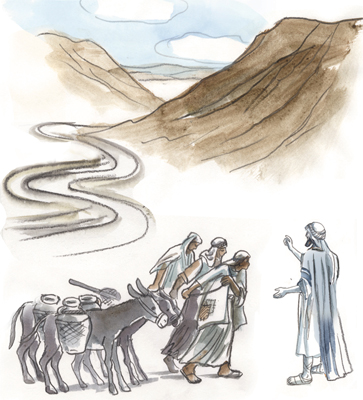 “Perhaps you live near us.” — by Israeli artist Nurit Tzarfati

8They said to Joshua, “We are your servants.”

And Joshua said to them, “Who are you? And where do you come from?”

9They said to him, “Your servants have come from a very far country, because of the name of the Lord your God; for we have heard a report of him, of all that he did in Egypt, 10and of all that he did to the two kings of the Amorites who were beyond the Jordan, King Sihon of Heshbon, and King Og of Bashan who lived in Ashtaroth. 11So our elders and all the inhabitants of our country said to us, ‘Take provisions in your hand for the journey; go to meet them, and say to them, “We are your servants; come now, make a treaty with us.”’ 12Here is our bread; it was still warm when we took it from our houses as our food for the journey, on the day we set out to come to you, but now, see, it is dry and moldy; 13these wineskins were new when we filled them, and see, they are burst; and these garments and sandals of ours are worn out from the very long journey.”

14So the leaders partook of their provisions, and did not ask direction from the Lord.

The Israelite leaders walked by sight and not by faith.

It seems to take us a long time to learn the lesson that neglect of prayer always leads to trouble, and destroys the spirit of discernment. Neglect of prayer always suggests pride in our own judgment, which is fatal. Satan as an angel of light is so plausible. The foolish virgins so resembled those who were wise. The tares sown in the field are so similar to the wheat. The voice of the hireling sounds very like the voice of the shepherd.

How can we ever match Satan and his subtle ways? Listen to me. Never, never, NEVER trust your own judgment in anything. When common sense says that a course is right, lift your heart to God, for the path of faith and the path of blessing may be in a direction completely opposite to that which you call common sense. When voices tell you that action is urgent, that something must be done immediately, refer everything to the tribunal of heaven. Then if you are still in doubt, dare to stand still. Be strong enough and brave enough to dare to stand and wait on God, for none of them that wait on Him shall ever be ashamed. Take it, all of it, to the Lord in prayer.

–from Victorious Christian Living:  Studies in the Book of Joshua
by Alan Redpath

15And Joshua made peace with them, guaranteeing their lives by a treaty; and the leaders of the congregation swore an oath to them.

16But when three days had passed after they had made a treaty with them, they heard that they were their neighbors and were living among them. 17So the Israelites set out and reached their cities on the third day. Now their cities were Gibeon, Chephirah, Beeroth, and Kiriath-jearim. 18But the Israelites did not attack them, because the leaders of the congregation had sworn to them by the Lord, the God of Israel. Then all the congregation murmured against the leaders.

19But all the leaders said to all the congregation, “We have sworn to them by the Lord, the God of Israel, and now we must not touch them. 20This is what we will do to them: We will let them live, so that wrath may not come upon us, because of the oath that we swore to them.” 21The leaders said to them, “Let them live.” So they became hewers of wood and drawers of water for all the congregation, as the leaders had decided concerning them.

O Lord, who shall sojourn in your tent?
Who shall dwell on your holy hill?

He who swears to his own hurt and does not change . . .

22Joshua summoned them, and said to them, “Why did you deceive us, saying, ‘We are very far from you,’ while in fact you are living among us? 23Now therefore you are cursed, and some of you shall always be slaves, hewers of wood and drawers of water for the house of my God.”

Better is one day in your courts
than a thousand elsewhere;
I would rather be a doorkeeper in the house of my God
than dwell in the tents of the wicked.

24They answered Joshua, “Because it was told to your servants for a certainty that the Lord your God had commanded his servant Moses to give you all the land, and to destroy all the inhabitants of the land before you; so we were in great fear for our lives because of you, and did this thing. 25And now we are in your hand: do as it seems good and right in your sight to do to us.”

No complaint from the Gibeonites!  Essentially, they were happy with the prospect of being incorporated into Israel, and becoming servants of the Lord, even if it was in menial service.

26This is what he did for them: he saved them from the Israelites; and they did not kill them. 27But on that day Joshua made them hewers of wood and drawers of water for the congregation and for the altar of the Lord, to continue to this day, in the place that he should choose.

The Gibeonites after Joshua 9:

These are examples of the great things God can do with people who are sinners, but come to Him in humility and love.

HERE  Selah does a hauntingly beautiful version of the traditional folksong,  “I’m Just a Poor Wayfaring Stranger.”  This song reminds me of the clever/deceitful ruse used by the Gibeonites, and the long road the Israelites had already traveled to be “just going over Jordan.”

This entry was posted on Thursday, October 22nd, 2015 at 2:00 AM and is filed under Bible. You can follow any responses to this entry through the RSS 2.0 feed. You can leave a response, or trackback from your own site.