The Last Words of David

Now these are the last words of David:

The oracle of David, son of Jesse,
the oracle of the man whom God exalted,
the anointed of the God of Jacob,
the favorite of the Strong One of Israel:

This remarkable relationship with God is the reason why David was Israel’s greatest king, and the most prominent ancestor of Jesus Christ. The New Testament begins with these words: The book of the genealogy of Jesus Christ, the Son of David (Matthew 1:1).

2The spirit of the Lord speaks through me,
his word is upon my tongue.
3The God of Israel has spoken,
the Rock of Israel has said to me:
One who rules over people justly,
ruling in the fear of God,
4is like the light of morning,
like the sun rising on a cloudless morning,
gleaming from the rain on the grassy land.

5Is not my house like this with God?
For he has made with me an everlasting covenant,
ordered in all things and secure.
Will he not cause to prosper
all my help and my desire?
6But the godless are all like thorns that are thrown away;
for they cannot be picked up with the hand;

7to touch them one uses an iron bar or the shaft of a spear.
And they are entirely consumed in fire on the spot.

HERE  is “What a Mighty God We Serve!” 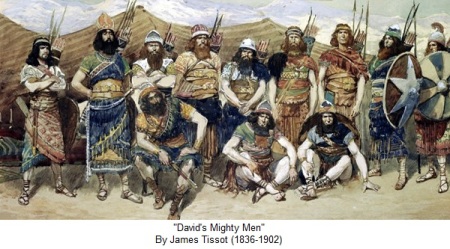 The day for mighty men and women — heroic men and women for God — has not ended. “The triumph of the church as a whole depends upon the personal victory of every Christian. In other words, your victory, your life, your personal testimony, are important to the cause of God today. What happens out in New Guinea, down in the Amazon jungle, over in disturbed Congo, is not unrelated to what happens in your own personal relationship with God and your personal battle against the forces of darkness. Victory for the church on the whole world-front depends upon victory in your life and in mine; ‘home’ and ‘foreign’ situations cannot be detached.”

8These are the names of the warriors whom David had:

These remarkable men were used by God to be the foundation of the greatness of David’s reign.

Josheb-basshebeth a Tahchemonite; he was chief of the Three; he wielded his spear against eight hundred whom he killed at one time.

9Next to him among the three warriors was Eleazar son of Dodo son of Ahohi. He was with David when they defied the Philistines who were gathered there for battle. The Israelites withdrew, 10but he stood his ground. He struck down the Philistines until his arm grew weary, though his hand clung to the sword. The Lord brought about a great victory that day. Then the people came back to him—but only to strip the dead.

11Next to him was Shammah son of Agee, the Hararite. The Philistines gathered together at Lehi, where there was a plot of ground full of lentils; and the army fled from the Philistines. 12But he took his stand in the middle of the plot, defended it, and killed the Philistines; and the Lord brought about a great victory.

13Towards the beginning of harvest three of the thirty chiefs went down to join David at the cave of Adullam, while a band of Philistines was encamped in the valley of Rephaim. 14David was then in the stronghold; and the garrison of the Philistines was then at Bethlehem. 15David said longingly, “O that someone would give me water to drink from the well of Bethlehem that is by the gate!” 16Then the three warriors broke through the camp of the Philistines, drew water from the well of Bethlehem that was by the gate, and brought it to David. But he would not drink of it; he poured it out to the Lord, 17for he said, “The Lord forbid that I should do this. Can I drink the blood of the men who went at the risk of their lives?” Therefore he would not drink it.

These three warriors responded not to a command, or even to a suggestion, but to the longing of their king. When David saw the water, knowing the danger they faced to get it, he considered it too valuable for him, and poured it out on the ground as a sacrifice to the Lord.

The three warriors did these things.

18Now Abishai son of Zeruiah, the brother of Joab, was chief of the Thirty. With his spear he fought against three hundred men and killed them, and won a name beside the Three. 19He was the most renowned of the Thirty, and became their commander; but he did not attain to the Three.

20Benaiah son of Jehoiada was a valiant warrior from Kabzeel, a doer of great deeds; he struck down two sons of Ariel of Moab. He also went down and killed a lion in a pit on a day when snow had fallen. 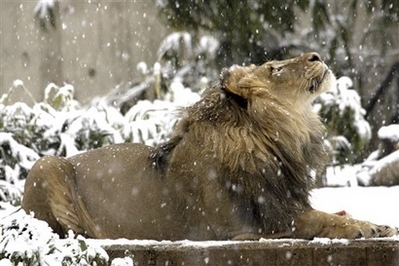 A lion fell into a pit. A man plunged in after him and slew him. And it was in the time of snow. I have always felt sorry for that lion. Lions detest snow, and that lion did not have a sporting chance. But his troubles are over now, and the man has something to teach us.

Benaiah must have been one who had trained himself by many and private disciplines to be ready for anything, even a lion in a pit of snow. The snow, of course, made it harder for him, too, but he did not hesitate. He went down and slew the lion.

Quite suddenly in the midst of our ordinary occupations any of us may be face to face with a lion in a pit. It may be in time of snow—in circumstances which make it harder than usual to withstand. But we can. The moment we are conscious of the lion (Peter speaks of the devil as a roaring lion in 1 Peter 5:8), the Spirit of God will put a sword into our hands. Some strong word of Scripture will be flashed across our minds. If we grasp that word, and thrust with all our might, there can be only one end to the fight. More than conquerors through Him that loved us will tell the end of that lion fight—even in time of snow.

21And he killed an Egyptian, a handsome man. The Egyptian had a spear in his hand; but Benaiah went against him with a staff, snatched the spear out of the Egyptian’s hand, and killed him with his own spear. 22Such were the things Benaiah son of Jehoiada did, and won a name beside the three warriors. 23He was renowned among the Thirty, but he did not attain to the Three. And David put him in charge of his bodyguard.

24Among the Thirty were:
Asahel brother of Joab;
Elhanan son of Dodo of Bethlehem;
25Shammah of Harod;
Elika of Harod;
26Helez the Paltite;
Ira son of Ikkesh of Tekoa;
27Abiezer of Anathoth;
Mebunnai the Hushathite;
28Zalmon the Ahohite;
Maharai of Netophah;
29Heleb son of Baanah of Netophah;
Ittai son of Ribai of Gibeah of the Benjaminites;
30Benaiah of Pirathon;
Hiddai of the torrents of Gaash;
31Abi-albon the Arbathite;
Azmaveth of Bahurim;
32Eliahba of Shaalbon;
the sons of Jashen:
Jonathan 33son of Shammah the Hararite;
Ahiam son of Sharar the Hararite;
34Eliphelet son of Ahasbai of Maacah;
Eliam son of Ahithophel the Gilonite;
35Hezro of Carmel;
Paarai the Arbite;
36Igal son of Nathan of Zobah;
Bani the Gadite;
37Zelek the Ammonite;
Naharai of Beeroth, the armor-bearer of Joab son of Zeruiah;
38Ira the Ithrite;
Gareb the Ithrite;
39Uriah the Hittite—

My mother, it is clear to see, was very fond of Bible names.
My brother’s Mordecaiah Nicodemus Zachariah James.
My mother named my little sis—
and this will surely hurt your head—
Ruth Bilpah Zippora Mary Sarah Jocabed.
I’m the first of triplets three,
and here’s the handle she gave me:
Jeremiah Isaachar Reuben bar Hilkiah.
The other two are:  Jonadab Amos Ben Milchaiah
and Hananeel Megiddo Joel Azariah.

My mother loved those Bible names, it’s really very true,
but I have always wondered why.  Her name is Cindy Sue.

This entry was posted on Friday, April 29th, 2016 at 2:00 AM and is filed under Bible. You can follow any responses to this entry through the RSS 2.0 feed. You can leave a response, or trackback from your own site.