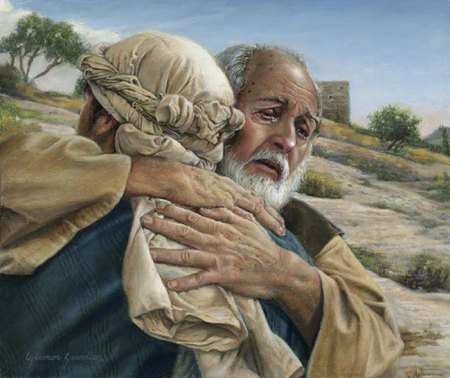 The Parable of the Lost Sheep

1Now the tax collectors and “sinners” were all gathering around to hear him. 2But the Pharisees and the teachers of the law muttered, “This man welcomes sinners and eats with them.” 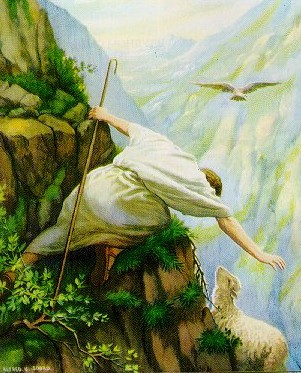 3Then Jesus told them this parable: 4“Suppose one of you has a hundred sheep and loses one of them. Does he not leave the ninety-nine in the open country and go after the lost sheep until he finds it?

All we like sheep have gone astray;
we have turned—every one—to his own way;
and the LORD has laid on him
the iniquity of us all.

5And when he finds it, he joyfully puts it on his shoulders 6and goes home. Then he calls his friends and neighbors together and says, ‘Rejoice with me; I have found my lost sheep.’ 7I tell you that in the same way there will be more rejoicing in heaven over one sinner who repents than over ninety-nine righteous persons who do not need to repent.

The Parable of the Lost Coin 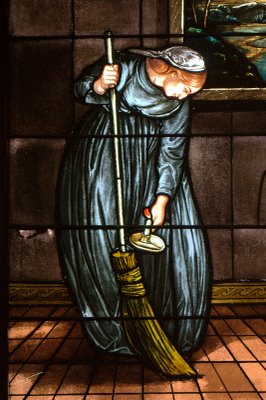 8“Or suppose a woman has ten silver coins and loses one. Does she not light a lamp, sweep the house and search carefully until she finds it? 9And when she finds it, she calls her friends and neighbors together and says, ‘Rejoice with me; I have found my lost coin.’ 10In the same way, I tell you, there is rejoicing in the presence of the angels of God over one sinner who repents.”

The Parable of the Lost Son

From James Weldon Johnson’s sermon “The Prodigal Son”, which was published in his 1927 book of sermons God’s Trombones: Seven Negro Sermons in Verse:

But Jesus spake in a parable, and he said:
A certain man had two sons.
Jesus didn’t give this man a name,
But his name is God Almighty.
And Jesus didn’t call these sons by name,
But ev’ry young man,
Ev’rywhere,
Is one of these two sons. 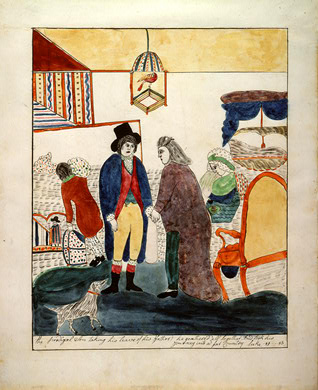 11Jesus continued: “There was a man who had two sons. 12The younger one said to his father, ‘Father, give me my share of the estate.’ So he divided his property between them.

13“Not long after that, the younger son got together all he had, set off for a distant country and there squandered his wealth in wild living. 14After he had spent everything, there was a severe famine in that whole country, and he began to be in need. 15So he went and hired himself out to a citizen of that country, who sent him to his fields to feed pigs. 16He longed to fill his stomach with the pods that the pigs were eating, but no one gave him anything. 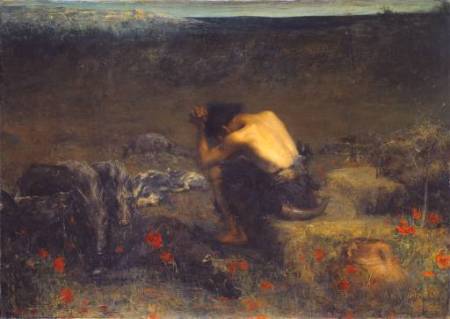 17“When he came to his senses, he said, ‘How many of my father’s hired men have food to spare, and here I am starving to death! 18I will set out and go back to my father and say to him: Father, I have sinned against heaven and against you. 19I am no longer worthy to be called your son; make me like one of your hired men.’ 20So he got up and went to his father.
“But while he was still a long way off, his father saw him and was filled with compassion for him; he ran to his son, threw his arms around him and kissed him.

And they shall be Mine, says the Lord of hosts, in that day when I publicly recognize and openly declare them to be My jewels (My special possession, My peculiar treasure). And I will spare them, as a man spares his own son who serves him. 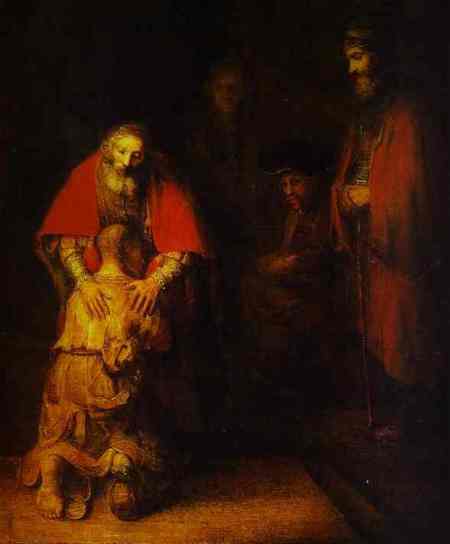 “The Return of the Prodigal Son” by Rembrandt, 1669 (The Hermitage, St. Petersburg, Russia)

“Often I have asked friends to give me their first impression of Rembrandt’s Prodigal Son. Inevitably, they point to the wise old man who forgives his son: the benevolent patriarch.

“The longer I look at ‘the patriarch’, the clearer it becomes to me that Rembrandt has done something quite different from letting God pose as the wise old head of a family. It all began with the hands. The two are quite different. The father’s left hand touching the son’s shoulder is strong and muscular. The fingers are spread out and cover a large part of the prodigal son’s shoulder and back. I can see a certain pressure, especially in the thumb. That hand seems not only to touch, but, with its strength, also to hold. Even though there is a gentleness in the way the father’s left hand touches his son, it is not without a firm grip.

“How different is the father’s right hand! This hand does not hold or grasp. It is refined, soft, and very tender. The fingers are close to each other and they have an elegant quality. It lies gently upon the son’s shoulder. It wants to caress, to stroke, and to offer consolation and comfort. It is a mother’s hand….

“As soon as I recognized the difference between the two hands of the father, a new world of meaning opened up for me. The Father is not simply a great patriarch. He is mother as well as father. He touches the son with a masculine hand and a feminine hand. He holds, and she caresses. He confirms and she consoles. He is , indeed, God, in whom both manhood and womanhood, fatherhood and motherhood, are fully present. That gentle and caressing right hand echoes for me the words of the prophet Isaiah: “Can a woman forget her baby at the breast, feel no pity for the child she has borne? Even if these were to forget, I shall not forget you. Look, I have engraved you on the palms of my hands.”

–from Henri J. M. Nouwen’s book The Return of the Prodigal Son:  A Story of Homecoming, based on his contemplation of the painting by Rembrandt, above.

21“The son said to him, ‘Father, I have sinned against heaven and against you. I am no longer worthy to be called your son.’

22“But the father said to his servants, ‘Quick! Bring the best robe and put it on him. Put a ring on his finger and sandals on his feet. 23Bring the fattened calf and kill it. Let’s have a feast and celebrate. 24For this son of mine was dead and is alive again; he was lost and is found.’ So they began to celebrate.

No one who conceals transgressions will prosper,
but one who confesses and forsakes them will obtain mercy.

“The Prodigal Daughter” by Charlie Mackesy

from This Day with the Master,
by Dennis F. Kinlaw

Jesus came into our broken world to provide a way to get the prodigals back home. He wanted to purge the rebellion from our hearts so we would not only come home, but also enjoy being home, so we would rejoice in the privilege of being a part of the family we had abandoned. Jesus paid the price for our return and healing.

As the years have passed, a conviction has deepened in my soul that Jesus wants to do far more for us than most of us imagine. So often we think in quite selfish terms about what Christ came to do. Yet in fact Christ died to do more for human beings than we have ever dreamed. If we do not dream a little bigger, we are never going to experience the deeper reality of his presence.

The reality is that Christ came to do more than just keep us out of hell. He wants to develop a personal relationship with each human being for whom he died. He died to save me not just from my sins, but also from my own self. “We all, like sheep, have gone astray, each of us has turned to his own way” (Isaiah 53:6).

Self-interest is the ultimate definition of sin, and the Cross holds the power to set each person free from self-interest. A French Catholic priest in the court of King Louis the XIV one day said, “Oh, God, isn’t there anybody left anywhere who loves you just for who you are? Can’t you find one such person? And if you can’t find one, couldn’t you make one?” That is why Jesus went to the Cross:  to bring me to the place where I love him simply because of who he is and not because of what he can do for me.

The ending of the story of the Prodigal Son would have been terribly disappointing if the son had merely returned for more of his inheritance without an apology to and an interest in his father. Once the father saw his son coming home, the relationship between father and son became the thing of paramount importance, and the reader forgets that the son ever needed anything except his father.

25“Meanwhile, the older son was in the field. When he came near the house, he heard music and dancing. 26So he called one of the servants and asked him what was going on. 27‘Your brother has come,’ he replied, ‘and your father has killed the fattened calf because he has him back safe and sound.’

28“The older brother became angry and refused to go in. So his father went out and pleaded with him. 29But he answered his father, ‘Look! All these years I’ve been slaving for you and never disobeyed your orders. Yet you never gave me even a young goat so I could celebrate with my friends. 30But when this son of yours who has squandered your property with prostitutes comes home, you kill the fattened calf for him!’

31” ‘My son,’ the father said, ‘you are always with me, and everything I have is yours. 32But we had to celebrate and be glad, because this brother of yours was dead and is alive again; he was lost and is found.’ ” 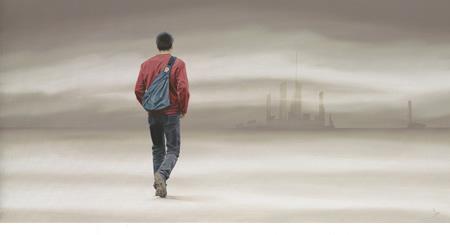 The opening sentence from the short story “The Capital of the World” by Ernest Hemingway:

Madrid is full of boys named Paco, which is the diminutive of the name Francisco, and there is a Madrid joke about a father who came to Madrid and inserted an advertisement in the personal columns of El Liberal which said: PACO MEET ME AT HOTEL MONTANA NOON TUESDAY ALL IS FORGIVEN PAPA” and how a squadron of Guardia Civil had to be called out to disperse the eight hundred young men who answered the advertisement.

. . . all seeking reconciliation with their fathers.

HERE  is Chris Rice and his moving “Untitled Hymn.”

This entry was posted on Monday, February 13th, 2017 at 2:00 AM and is filed under Bible. You can follow any responses to this entry through the RSS 2.0 feed. You can leave a response, or trackback from your own site.