Daniel’s Prayer for the People

Daniel recounts the revelation he received concerning the prophecy of Jeremiah about the seventy years of Jerusalem’s desolation (Jeremiah 25:11,12; 29:10). Significantly, the revelation follows Daniel’s prayer confessing the sinfulness of God’s people and the justice of Jerusalem’s desolation, and seeking the favor of God for the restoration of the city and the temple.  (The Reformation Bible)

In the first year of Darius son of Ahasuerus, by birth a Mede, who became king over the realm of the Chaldeans— 2 in the first year of his reign, I, Daniel, perceived in the books the number of years that, according to the word of the Lord to the prophet Jeremiah, must be fulfilled for the devastation of Jerusalem, namely, seventy years.

When exactly did the seventy years begin? At the time of the destruction of the temple by Nebuchadnezzar? The time of Daniel’s own captivity? Or is it to be understood as a round number for a human lifetime? Opinions vary.

3 Then I turned to the Lord God, to seek an answer by prayer and supplication with fasting and sackcloth and ashes.

This implies determination in prayer. Daniel had an objective to achieve in prayer, and he approached God as a man who would not be denied. He did this because he was rightly convinced that his prayer was in the will of God, and knew it was not motivated by any selfish desire. Daniel wasn’t passive as God’s prophetic plan unfolded before him. In his approach to God, he made a request, asking God to perform His promise in the way that Daniel thought would bring God most glory.

4 I prayed to the Lord my God and made confession, saying,

The Prayer of Daniel. digital art by Ted Larson.

“Ah, Lord, great and awesome God, keeping covenant and steadfast love with those who love you and keep your commandments, 5 we have sinned and done wrong, acted wickedly and rebelled, turning aside from your commandments and ordinances. 6 We have not listened to your servants the prophets, who spoke in your name to our kings, our princes, and our ancestors, and to all the people of the land.

7 “Righteousness is on your side, O Lord, but open shame, as at this day, falls on us, the people of Judah, the inhabitants of Jerusalem, and all Israel, those who are near and those who are far away, in all the lands to which you have driven them, because of the treachery that they have committed against you. 8 Open shame, O Lord, falls on us, our kings, our officials, and our ancestors, because we have sinned against you. 9 To the Lord our God belong mercy and forgiveness, for we have rebelled against him, 10 and have not obeyed the voice of the Lord our God by following his laws, which he set before us by his servants the prophets.

Daniel’s petitions are based on the character of God (His greatness, awesomeness, faithfulness, righteousness, forgiveness, mercies) and on His interests (Your people, Your city, Your holy mountain, Your sanctuary).

11 “All Israel has transgressed your law and turned aside, refusing to obey your voice. So the curse and the oath written in the law of Moses, the servant of God, have been poured out upon us, because we have sinned against you. 12 He has confirmed his words, which he spoke against us and against our rulers, by bringing upon us a calamity so great that what has been done against Jerusalem has never before been done under the whole heaven. 13 Just as it is written in the law of Moses, all this calamity has come upon us. We did not entreat the favor of the Lord our God, turning from our iniquities and reflecting on his fidelity. 14 So the Lord kept watch over this calamity until he brought it upon us. Indeed, the Lord our God is right in all that he has done; for we have disobeyed his voice.

15 “And now, O Lord our God, who brought your people out of the land of Egypt with a mighty hand and made your name renowned even to this day—we have sinned, we have done wickedly. 16 O Lord, in view of all your righteous acts, let your anger and wrath, we pray, turn away from your city Jerusalem, your holy mountain; because of our sins and the iniquities of our ancestors, Jerusalem and your people have become a disgrace among all our neighbors. 17 Now therefore, O our God, listen to the prayer of your servant and to his supplication, and for your own sake, Lord, let your face shine upon your desolated sanctuary. 18 Incline your ear, O my God, and hear. Open your eyes and look at our desolation and the city that bears your name. We do not present our supplication before you on the ground of our righteousness, but on the ground of your great mercies.

Here Daniel prays on firm New Testament ground. His confidence isn’t in his goodness, but in God’s goodness. And actually, this is what it means to pray in the name of Jesus. Those aren’t words we tack on to the end of a prayer, but they should express the fact we are praying in merits and righteousness of Jesus, not our own.

19 O Lord, hear; O Lord, forgive; O Lord, listen and act and do not delay! For your own sake, O my God, because your city and your people bear your name!”

Three primary views are held. (1) The critical view posits that the “prophecy” was written by a pseudo-Daniel in 165 B.C. and synchronizes (inaccurately) with the history between 586 B.C. (Jerusalem’s fall) and 164 B.C. (Antiochus IV Epiphanes). (2) The dispensational view has the sixty-ninth week terminating before Jesus’ crucifixion, leaving the seventieth (the present age being a “great parenthesis”) to be fulfilled in the great tribulation. (3) The conservative or traditional view asserts that the seventieth week was introduced by Jesus’ baptism and bisected (three and a half years) by his death, thus causing the sacrifices to cease (v. 27).  (The Archaeological Study Bible)

20 While I was speaking, and was praying and confessing my sin and the sin of my people Israel, and presenting my supplication before the Lord my God on behalf of the holy mountain of my God— 21 while I was speaking in prayer, the man Gabriel, whom I had seen before in a vision, came to me in swift flight at the time of the evening sacrifice. 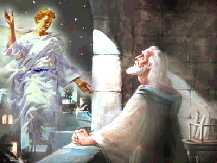 22 He came and said to me, “Daniel, I have now come out to give you wisdom and understanding. 23 At the beginning of your supplications a word went out, and I have come to declare it, for you are greatly beloved. So consider the word and understand the vision:

24 “Seventy weeks are decreed for your people and your holy city: to finish the transgression, to put an end to sin, and to atone for iniquity, to bring in everlasting righteousness, to seal both vision and prophet, and to anoint a most holy place. 25 Know therefore and understand: from the time that the word went out to restore and rebuild Jerusalem until the time of an anointed prince, there shall be seven weeks; and for sixty-two weeks it shall be built again with streets and moat, but in a troubled time.

Gabriel’s message to Daniel is simple and striking. 483 years – that is, 69 units of seven years – would pass from the time of the command recorded in Nehemiah 2:1-8 until the appearance of Messiah the Prince.

26 After the sixty-two weeks, an anointed one shall be cut off and shall have nothing, 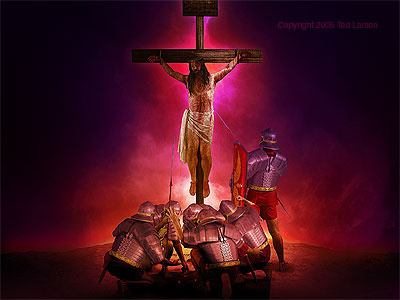 and the troops of the prince who is to come shall destroy the city and the sanctuary.

Many interpreters agree that the assailants are the armies of Titus who destroyed Jerusalem in A.D. 70. Others believe the prince himself is the Antichrist of the future.  (The Reformation Bible)

Its end shall come with a flood, and to the end there shall be war. Desolations are decreed. 27 He shall make a strong covenant with many for one week, and for half of the week he shall make sacrifice and offering cease; and in their place shall be an abomination that desolates, until the decreed end is poured out upon the desolator.”

There are great numbers of books/charts/timelines purporting to interpret Daniel’s revelations. Just as a foretaste, go to Google Images and look up “Daniel’s Seventy Weeks” — you will see dozens of charts and interpretations! I do not claim to understand all the viewpoints, or even to give you a good representation of the various points of view.  As Paul said in 1 Corinthians 2:2 — For I determined not to know any thing among you, save Jesus Christ, and him crucified.  For that reason,  I give you a song about our Savior, crucified and risen; desolations cease as we draw nearer to the Lord.  HERE  is “The Risen Christ” by Keith Getty and Phil Madeira.

This entry was posted on Monday, August 20th, 2018 at 2:00 AM and is filed under Bible. You can follow any responses to this entry through the RSS 2.0 feed. You can leave a response, or trackback from your own site.