1 After these things had been done, the leaders came to me and said, “Ezra, the Israelites, including the priests and Levites, have not kept themselves separate from the people around us. Those neighbors do evil things, as the Canaanites, Hittites, Perizzites, Jebusites, Ammonites, Moabites, Egyptians, and Amorites did. 2The Israelite men and their sons have married these women. They have mixed the people who belong to God with the people around them. The leaders and officers of Israel have led the rest of the Israelites to do this unfaithful thing.”

The problem is not primarily ethnic. Rather, it is religious — the Jews have adopted the evil practices, the abominations (as the King James Version puts it) of their neighbors and wives.

Ezra 9:1-2 seems to recall passages from the Law of Moses against intermarriage with the surrounding Canaanite tribes – in particular, Exodus 34:11-16 and Deuteronomy 7:1-4. We may see this conviction of sin on the part of the people and their leaders, and the way that the conviction of sin was phrased, to indicate (spiritually speaking) that Ezra’s arrival to bring the ministry of teaching God’s word was bearing fruit. The people heard the word, looked at their lives, and saw that the two did not match.

–David Guzik (and all following comments in purple)

3 When I heard this, I angrily tore my robe and coat, pulled hair from my head and beard, and sat down in shock.4 Everyone who trembled in fear at the word of the God of Israel gathered around me because of the unfaithfulness of the captives who had returned. I sat there in shock until the evening sacrifice.

Ezra had just finished a dangerous four-month journey from Babylonia to Jerusalem. He had perhaps over-romanticized the spiritual commitment of the return-from-exile pioneers and had expected to find something completely different than the culture of compromise that he found. Certainly, one of the reasons for his mourning was that Ezra remembered that it was these sins of idolatry and compromise that caused the tribes of Israel to be exiled before. He no doubt wondered how the people could endanger themselves like this again.

5 At the evening sacrifice I got up from where I had shown my shame. My robe and coat were torn, and I fell on my knees with my hands spread out to the Lord my God. 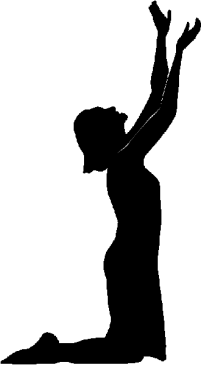 Ezra also spread out his hands to the Lord. This was the most common posture of prayer in the Old Testament. Many modern people close their eyes, bow their head, and fold their hands as they pray, but the Old Testament tradition was to spread out the hands toward heaven in a gesture of surrender, openness, and ready reception.

“My God, I am too ashamed and embarrassed to lift up my face to you, my God, because our sins are so many. They are higher than our heads. Our guilt even reaches up to the sky.

Ezra had a heart for holiness.  When he found out that God’s people had been faithless in matters of worship and marriage, he tore his clothes, pulled his own hair, and sat in mourning for an entire day. Then at the time of the evening sacrifice he bowed down before God and offered a prayer of confession, in which he numbered himself among the transgressors.

7 From the days of our ancestors until now, our guilt has been great. Because of our sins, we, our kings, and our priests have been punished by the sword and captivity. Foreign kings have taken away our things and shamed us, even as it is today.

8 “But now, for a short time, the Lord our God has been kind to us. He has let some of us come back from captivity and has let us live in safety in his holy place. And so our God gives us hope and a little relief from our slavery.

“The Jewish commentator Slotki observes poignantly: ‘A little grace had been granted by God to his people; a small remnant had found its weary way back to its home and driven a single peg into its soil; a solitary ray of light was shining; a faint breath of freedom lightened their slavery. How graphically Ezra epitomizes Jewish experience in these few words!’”

9 Even though we are slaves, our God has not left us. He caused the kings of Persia to be kind to us and has given us new life. We can rebuild the Temple and repair its ruins. And he has given us a wall to protect us in Judah and Jerusalem.

10 “But now, our God, what can we say after you have done all this? We have disobeyed your commands11 that you gave through your servants the prophets. You said, ‘The land you are entering to own is ruined; the people living there have spoiled it by the evil they do. Their evil filled the land with uncleanness from one end to the other.12 So do not let your daughters marry their sons, and do not let their daughters marry your sons. Do not wish for their peace or success. Then you will be strong and eat the good things of the land. Then you can leave this land to your descendants forever.’

13 “What has happened to us is our own fault. We have done evil things, and our guilt is great. But you, our God, have punished us less than we deserve; you have left a few of us alive.14 We should not again break your commands by allowing marriages with these wicked people. If we did, you would get angry enough to destroy us, and none of us would be left alive.15 Lord, God of Israel, by your goodness a few of us are left alive today. We admit that we are guilty and none of us should be allowed to stand before you.”

As the tribes of Israel piled sin upon sin before the fall of the northern and southern kingdoms, God still showed remarkable mercy to them. He did not have to preserve them in exile; there could have been genocide instead. As well, He did not have to bring them back from exile into the Promised Land once again. Each of these was a wonderful example of God’s mercy in the midst of judgment.

“Nothing in my hands I bring — simply to thy cross I cling.”  No excuses, no justifications, no spin — just confession.

This entry was posted on Wednesday, February 20th, 2019 at 2:00 AM and is filed under Bible. You can follow any responses to this entry through the RSS 2.0 feed. You can leave a response, or trackback from your own site.