In this chapter there is a whole set of verdicts about Jesus (as from William Barclay).

31Yet many in the crowd believed in him and were saying, ‘When the Messiah comes, will he do more signs than this man has done?’

32The Pharisees heard the crowd muttering such things about him, and the chief priests and Pharisees sent temple police to arrest him. 33Jesus then said, “I will be with you a little while longer, and then I am going to him who sent me. 34You will search for me, but you will not find me; and where I am, you cannot come.”

37On the last day of the festival, the great day,

At the Feast of Tabernacles, water was poured out daily at the altar to remind everyone of the water God miraculously provided for a thirsty Israel in the wilderness.

while Jesus was standing there, he cried out, “Let anyone who is thirsty come to me, 38and let the one who believes in me drink. As the scripture has said, ‘Out of the believer’s heart shall flow rivers of living water.’” 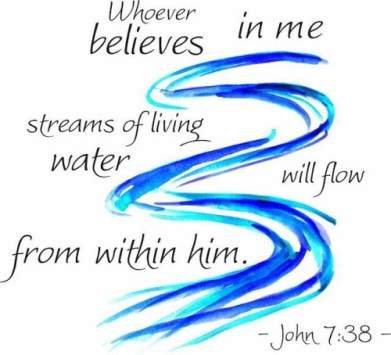 Shades of the conversation with the woman at the well. To her Jesus had said,  “…. Whoever drinks of the water I shall give him will never thirst. But the water that I shall give him will become in him a fountain of water springing up into everlasting life.” But what a different contest! With her, he was having a private conversation in Samaria. Here Jesus is speaking at the crowded temple during a very busy festival. What is this “living water” Jesus is talking about? The next verse is John’s explanation — the Holy Spirit!

39Now he said this about the Spirit, which believers in him were to receive; for as yet there was no Spirit, because Jesus was not yet glorified.

40When they heard these words, some in the crowd said, “This is really the prophet.”

There is the verdict that he was a prophet (John 7:40). That is true. The prophet is the forth-teller of the will of God, the man who has lived so close to God that he knows his mind and purposes. That is true of Jesus; but there is this difference. The prophet says: “Thus saith the Lord.” His authority is borrowed and delegated. His message is not his own. Jesus says: “I say unto you.” He has the right to speak, not with a delegated authority, but with his own.

41Others said, “This is the Messiah.”

But some asked, “Surely the Messiah does not come from Galilee, does he? 42Has not the scripture said that the Messiah is descended from David and comes from Bethlehem, the village where David lived?” 43So there was a division in the crowd because of him.

Where is the fact checker?! They could have done just a bit of research — maybe ask him where he was born . . .

44Some of them wanted to arrest him, but no one laid hands on him.

45Then the temple police went back to the chief priests and Pharisees, who asked them, “Why did you not arrest him?”

46The police answered, “Never has anyone spoken like this!”

There is the verdict that he had a most dynamic personality (John 7:46). The verdict of the officers who were sent to arrest him and came back empty-handed was that never had any man spoken like this.  When we think of how this Galilaean carpenter faced the highest in the land and dominated them until it was they who were on trial and not he, we are bound to admit that he was at least one of the supreme personalities in history. The picture of a gentle, anaemic Jesus will not do.

47Then the Pharisees replied, “Surely you have not been deceived too, have you? 48Has any one of the authorities or of the Pharisees believed in him? 49But this crowd, which does not know the law—they are accursed.”

They are so determined not to believe! They are so arrogant in their judgment of those who do!

50Nicodemus, who had gone to Jesus before, and who was one of them, asked, 51“Our law does not judge people without first giving them a hearing to find out what they are doing, does it?”

Nicodemus speaks up to defend Jesus (John 7:50). In that council of the Jewish authorities his was the lone voice raised in defense. There lies the duty of every one of us. Ian Maclaren, a minister of the Free Church of Scotland, used to tell students when they preached: “Speak a good word for Jesus Christ.” We live today in a world which is hostile to Christianity in many ways and in many places, but the strange thing is that the world was never more ready to talk about Christ and to discuss religion. We live in a generation when every one of us can earn the royal title, “Defender of the Faith.” It is the privilege that God has given us that we can all be advocates and defenders of Christ in face of the criticism –and sometimes the mockery–of men.

52They replied, “Surely you are not also from Galilee, are you? Search and you will see that no prophet is to arise from Galilee.” 53Then each of them went home.

Galileans were objects of Judean scorn, and the butt of Judean jokes. To the Jewish leaders from Judea, nothing good could come from Galilee. But in fact, a prophet had risen from Galilee. Jonah, who was a type of Jesus, came from Gath Hepher, which was three miles north of Nazareth in Lower Galilee (2 Kings 14:25).

“Come, all you who are thirsty,
come to the waters;
and you who have no money,
come, buy and eat!
Come, buy wine and milk
without money and without cost.

HERE  is “Come to the water”  sung by the Capital University Chapel Choir.

1)   Verse 39 says that Jesus used the term “living water” to refer to the Holy Spirit. What additional understanding of the Holy Spirit does that phrase give you?

2)   Our friend Nicodemus shows up in verse 50. Judging from what he says there, what impact do you think his conversation with Jesus in chapter 3 has had on him?

Come to the water.   http://hbumc2.visitmysite.net/_media/uploads/files/bulletins/LHBulletin123117.pdf

This entry was posted on Friday, November 22nd, 2019 at 2:00 AM and is filed under Bible. You can follow any responses to this entry through the RSS 2.0 feed. You can leave a response, or trackback from your own site.