Do not be surprised, my brothers and sisters, if the world hates you. We know that we have passed from death to life, because we love each other. Anyone who does not love remains in death.

20Remember the word that I said to you, ‘Servants are not greater than their master.’ If they persecuted me, they will persecute you; if they kept my word, they will keep yours also. 21But they will do all these things to you on account of my name, because they do not know him who sent me. 22If I had not come and spoken to them, they would not have sin; but now they have no excuse for their sin. 23Whoever hates me hates my Father also. 24If I had not done among them the works that no one else did, they would not have sin. But now they have seen and hated both me and my Father. 25It was to fulfill the word that is written in their law, ‘They hated me without a cause.’

The reason for the hatred: knowledge and responsibility.

Jesus did two things. First, he exposed sin. He told men of the things which grieved God and of the way in which God wished them to walk. He set the true way before men. Second, he provided the remedy for sin; and he did that in a double sense. He opened the way to forgiveness for past sin, and he provided the power which would enable a man to overcome sin and do the right. These were the privileges and the knowledge which he brought to men. Suppose a man is ill; suppose he consults a doctor, and the doctor diagnoses what is wrong and prescribes a cure. If that man disregards the diagnosis and refuses to use the cure, he has no one to blame but himself if he dies, or comes to a condition which makes life wretched for himself.

It is possible for us to do the same. Not many are actively hostile to Christ, but many live their lives as if Christ had never come and simply disregard him. But no man can know life in this world or in the world to come if he disregards the Lord of all good life.

26“When the Advocate comes, whom I will send to you from the Father, the Spirit of truth who comes from the Father, he will testify on my behalf. 27You also are to testify because you have been with me from the beginning.” 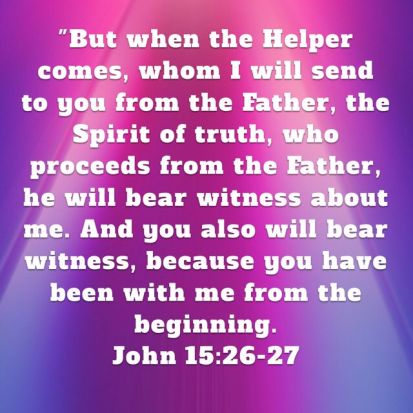 It is remarkable that our Lord moves quickly from His words about love for one another to this word — to the world’s hatred for the Christian. The world refers to secular society. The world is organized society without God, but with its own morals and standards and value systems. It is what we ordinarily call the system, and it is what hates believers and wants nothing to do with them.

What is to be the attitude of the Christian to this kind of world in which we still live? Our Lord’s answer is found in verses 26-27. He says, When the Spirit of God has come, you will bear witness to this world. The world is not to be left in its hopeless rejection of Christ–even though it has resisted and rejected truth when it knew it to be truth.

So the Christian is not to retaliate, not to resent the hatred and persecution of the world, not to be vindictive and to return evil for evil. Rather, we are exhorted to return good for evil. Nor are we to retire from the world, to withdraw from it and build a Christian ghetto in which to hide ourselves and then throw tracts across the chasm! Rather, we are to move into the world, live in its midst just as Jesus did, and bear witness to the truth, even though it is often rejected. We are to do this for the sake of those who will receive, believe, and accept the Word.

Primarily it is the witness of the Holy Spirit. He does what no person can do. The Spirit of God opens hearts, removes blindness, and opens minds to understand. He bears witness that a word is true, gives it a ring of authenticity, so that power in witnessing rests with the Spirit, not with us. But as Jesus indicates here, we also are to bear witness here as the apostles did–as to what they saw and heard, what they themselves experienced. That is where every Christian stands. Just before His ascension Jesus said, But you will receive power when the Holy Spirit comes on you; and you will be my witnesses . . . (Acts l:8a). We are all to be witnesses of what Jesus has been to us, what we have experienced, what has happened in our lives, what He has done for us.

And the Holy Spirit will witness with that, using those words, simple as they may be, to open minds and to break through hard hearts, to pierce and break down barriers, and to open people up to the Word.

HERE  is a song from my childhood — “Jesus wants me for a sunbeam.”

1)   What is to be our response when we see or experience hate in the world? What is the way we can be an effective witness?

2)   Pray this with me: “Lord, You have placed me in this world, in this time, in this community, in this family. Now let me be Your witness today in all that I say and do. Let your love shine through me, for Jesus’ sake.”

This entry was posted on Friday, December 20th, 2019 at 2:00 AM and is filed under Bible. You can follow any responses to this entry through the RSS 2.0 feed. You can leave a response, or trackback from your own site.