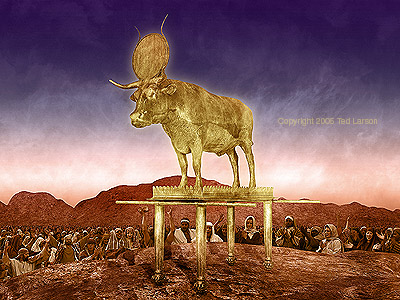 Alan Jackson is one of the biggest names in country music.  HERE  he sings a song that I remember my mother singing as we said prayers at bedtime — “Turn Your Eyes upon Jesus.” It is easy for us to lose focus, as the Israelites will do in this chapter. What “golden calves” shine out for your attention? What do you do to keep your eyes on Jesus?

When the people saw that Moses delayed to come down from the mountain, the people gathered around Aaron, and said to him, “Come, make gods for us, who shall go before us; as for this Moses, the man who brought us up out of the land of Egypt, we do not know what has become of him.” 2Aaron said to them, “Take off the gold rings that are on the ears of your wives, your sons, and your daughters, and bring them to me.” 3So all the people took off the gold rings from their ears, and brought them to Aaron. 4He took the gold from them, formed it in a mold, and cast an image of a calf; and they said, “These are your gods, O Israel, who brought you up out of the land of Egypt!”

They exchanged the glory of God
for the image of an ox that eats grass.

5When Aaron saw this, he built an altar before it; and Aaron made proclamation and said, “Tomorrow shall be a festival to the Lord.” 6They rose early the next day, and offered burnt offerings and brought sacrifices of well-being; and the people sat down to eat and drink, and rose up to revel.

7The Lord said to Moses, “Go down at once! Your people, whom you brought up out of the land of Egypt, have acted perversely; 8they have been quick to turn aside from the way that I commanded them; they have cast for themselves an image of a calf, and have worshiped it and sacrificed to it, and said, ‘These are your gods, O Israel, who brought you up out of the land of Egypt!”

9The Lord said to Moses, “I have seen this people, how stiff-necked they are. 10Now let me alone, so that my wrath may burn hot against them and I may consume them; and of you I will make a great nation.”

And Stephen said, “Moses was with our ancestors, the assembly of God’s people in the wilderness, when the angel spoke to him at Mount Sinai. And there Moses received life-giving words to pass on to us.

But our ancestors refused to listen to Moses. They rejected him and wanted to return to Egypt.  They told Aaron, ‘Make us some gods who can lead us, for we don’t know what has become of this Moses, who brought us out of Egypt.’  So they made an idol shaped like a calf, and they sacrificed to it and celebrated over this thing they had made.  Then God turned away from them and abandoned them to serve the stars of heaven as their gods!”

11But Moses implored the Lord his God, and said, “O Lord, why does your wrath burn hot against your people, whom you brought out of the land of Egypt with great power and with a mighty hand? 12Why should the Egyptians say, ‘It was with evil intent that he brought them out to kill them in the mountains, and to consume them from the face of the earth’? Turn from your fierce wrath; change your mind and do not bring disaster on your people. 13Remember Abraham, Isaac, and Israel, your servants, how you swore to them by your own self, saying to them, ‘I will multiply your descendants like the stars of heaven, and all this land that I have promised I will give to your descendants, and they shall inherit it forever.’“

Moses intercedes for the people, and God shows his grace.

14And the Lord changed his mind about the disaster that he planned to bring on his people.

15Then Moses turned and went down from the mountain, carrying the two tablets of the covenant in his hands, tablets that were written on both sides, written on the front and on the back. 16The tablets were the work of God, and the writing was the writing of God, engraved upon the tablets.

17When Joshua heard the noise of the people as they shouted, he said to Moses, “There is a noise of war in the camp.”

19As soon as he came near the camp and saw the calf and the dancing, Moses’ anger burned hot, and he threw the tablets from his hands and broke them at the foot of the mountain. 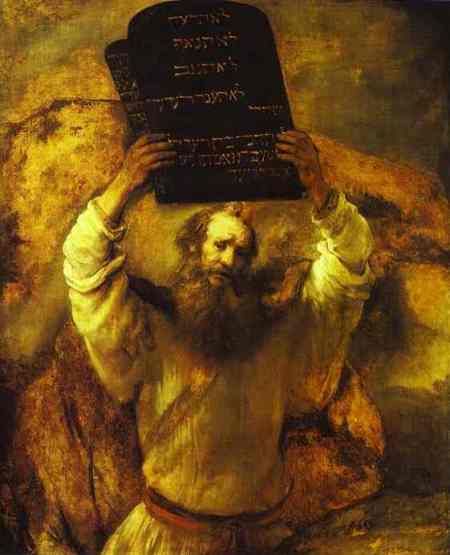 “Moses Smashing the Tablets of the Law” oil on canvas by Rembrandt, 1659 (Gemaldegalerie, Berlin)

20He took the calf that they had made, burned it with fire, ground it to powder, scattered it on the water, and made the Israelites drink it.

21Moses said to Aaron, “What did this people do to you that you have brought so great a sin upon them?”

22And Aaron said, “Do not let the anger of my lord burn hot; you know the people, that they are bent on evil. 23They said to me, ‘Make us gods, who shall go before us; as for this Moses, the man who brought us up out of the land of Egypt, we do not know what has become of him.’ 24So I said to them, ‘Whoever has gold, take it off’; so they gave it to me, and I threw it into the fire, and out came this calf!”

25When Moses saw that the people were running wild (for Aaron had let them run wild, to the derision of their enemies), 26then Moses stood in the gate of the camp, and said, “Who is on the Lord’s side? Come to me!” And all the sons of Levi gathered around him.

27He said to them, “Thus says the Lord, the God of Israel, ‘Put your sword on your side, each of you! Go back and forth from gate to gate throughout the camp, and each of you kill your brother, your friend, and your neighbor.’“ 28The sons of Levi did as Moses commanded, and about three thousand of the people fell on that day. 29Moses said, “Today you have ordained yourselves for the service of the Lord, each one at the cost of a son or a brother, and so have brought a blessing on yourselves this day.”

The heroic loyalty of the Levites may be why theirs was chosen to be the priestly tribe.

30On the next day Moses said to the people, “You have sinned a great sin. But now I will go up to the Lord; perhaps I can make atonement for your sin.”

31So Moses returned to the Lord and said, “Alas, this people has sinned a great sin; they have made for themselves gods of gold.

Gods made with hands are not gods.

32But now, if you will only forgive their sin—but if not, blot me out of the book that you have written.”

Moses intercedes again for the people.

33But the Lord said to Moses, “Whoever has sinned against me I will blot out of my book. 34But now go, lead the people to the place about which I have spoken to you; see, my angel shall go in front of you. Nevertheless, when the day comes for punishment, I will punish them for their sin.”

35Then the Lord sent a plague on the people, because they made the calf—the one that Aaron made.

Gone, but not forgotten!

The idea of a golden calf persisted in the nation of Israel. Hundreds of years later, King Jereboam repeated the identical sin, sounding a lot like Aaron:

Jeroboam asked for advice and then made two gold statues of calves. He showed them to the people and said, “Listen everyone! You won’t have to go to Jerusalem to worship anymore. Here are your gods  who rescued you from Egypt.” Then he put one of the gold calves in the town of Bethel. He put the other one in the town of Dan, and the crowd walked out in front as the calf was taken there.  What Jeroboam did was a terrible sin.

golden calf idol, from the movie, The Ten Commandments.   https://www.christies.com/lotfinder/Lot/the-golden-calf-statuette-from-the-ten-2102408-details.aspx?sc_lang=zh

This entry was posted on Thursday, June 11th, 2020 at 2:00 AM and is filed under Bible. You can follow any responses to this entry through the RSS 2.0 feed. You can leave a response, or trackback from your own site.