Twelve Men Are Sent into Canaan

1The LORD said to Moses, 2” Choose a leader from each tribe and send them into Canaan to explore the land I am giving you.”

God used the report of the spies as a test of Israel’s faith.

3So Moses sent twelve tribal leaders from Israel’s camp in the Paran Desert 4-16with orders to explore the land of Canaan. And here are their names:

Shammua son of Zaccur from Reuben,

Shaphat son of Hori from Simeon,

Caleb son of Jephunneh from Judah,

Igal son of Joseph from Issachar,

Joshua son of Nun from Ephraim,

Palti son of Raphu from Benjamin,

Gaddiel son of Sodi from Zebulun,

Gaddi son of Susi from Manasseh,

Ammiel son of Gemalli from Dan,

Sethur son of Michael from Asher,

and Geuel son of Machi from Gad.

17Before Moses sent them into Canaan, he said:

After you go through the Southern Desert of Canaan, continue north into the hill country 18and find out what those regions are like. Be sure to remember how many people live there, how strong they are, 19-20and if they live in open towns or walled cities. See if the land is good for growing crops and find out what kinds of trees grow there. It’s time for grapes to ripen, so try to bring back some of the fruit that grows there.

This was an entirely reasonable pursuit for Moses, and representative of the curiosity of the whole nation. After all, they had never seen this land, nor had any Israelite for some 400 years. But God already told them what the land was like. At Moses’ calling at the burning bush, God told him the land of Canaan was a good and large land, to a land flowing with milk and honey (Exodus 3:8), and Moses told the people of the goodness of the land (Exodus 13:5).

21The twelve men left to explore Canaan from the Zin Desert in the south all the way to the town of Rehob near Lebo-Hamath in the north. 22As they went through the Southern Desert, they came to the town of Hebron, which was seven years older than the Egyptian town of Zoan. In Hebron, they saw the three Anakim  clans of Ahiman, Sheshai, and Talmai. 23-24When they got to Bunch Valley,  they cut off a branch with such a huge bunch of grapes, that it took two men to carry it on a pole. That’s why the place was called Bunch Valley. Along with the grapes, they also took back pomegranates  and figs. 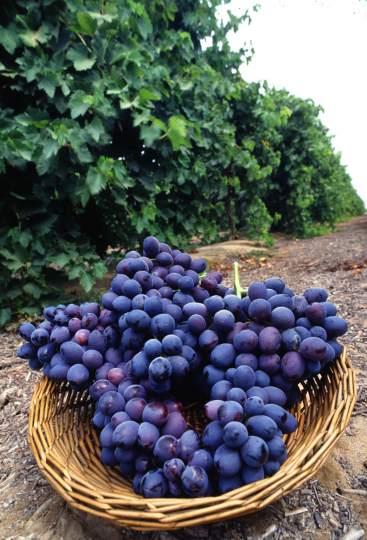 Imagine eating nothing much but quail and manna for as long as you can remember — and then you taste these grapes! . . .

I remember the first time I saw and ate a kiwi; it was a magical, wonderful moment.  What a creative and kind God we have, to give us such good gifts!  HERE  is John Rutter’s “Look at the World.”  Listen and say Thank you, Lord.

Praise to thee, O lord for all creation.
Give us thankful hearts that we may see
All the gifts we share, and every blessing,
All things come of thee.

Look at the earth bringing forth fruit and flower,
Look at the sky, the sunshine and the rain.
Look at the hills, look at the trees and mountains,
Valley and flowing river, field and plain.

Think of the spring, think of the warmth of summer
Bringing the harvest before the winters cold.
Everything grows, everything has a season,
till it is gathered to the Father’s fold.

Every good gift, all that we need and cherish.
Comes from the Lord in token of his love
We are his hands, stewards of all his bounty
His is the earth and his the heavens above.

The Men Report Back to the People

25After exploring the land of Canaan forty days, 26the twelve men returned to Kadesh in the Paran Desert and told Moses, Aaron, and the people what they had seen. They showed them the fruit 27and said:

Look at this fruit! The land we explored is rich with milk and honey. 28But the people who live there are strong, and their cities are large and walled. We even saw the three Anakim  clans. 29Besides that, the Amalekites live in the Southern Desert; the Hittites, Jebusites, and Amorites are in the hill country; and the Canaanites  live along the Mediterranean Sea and the Jordan River.

30Caleb calmed down the crowd and said, ” Let’s go and take the land. I know we can do it!”

When evil men advance against me
to devour my flesh,
when my enemies and my foes attack me,
they will stumble and fall.

Though an army besiege me,
my heart will not fear;
though war break out against me,
even then will I be confident.

31But the other men replied, ” Those people are much too strong for us.” 32Then they started spreading rumors and saying, ” We won’t be able to grow anything in that soil. And the people are like giants. 33In fact, we saw the Nephilim who are the ancestors of the Anakim. They were so big that we felt as small as grasshoppers.”

as small as grasshoppers!

Unbelief often presents itself as being “factual” or “practical” or “down to earth.” Yet, the most factual, practical, and down to earth thing we can to is trust the word of the living God. Their unbelief was not according to the facts, but despite the facts.

Significantly, two men could see the exact same sights — the same grapes, the same men, the same land, the same cities — one can come away singing in faith, and the other is filled with a sense of certain doom. Ultimately, faith or unbelief does not spring from circumstances or environment, but from our hearts, which God must change.

This entry was posted on Wednesday, September 23rd, 2020 at 2:00 AM and is filed under Bible. You can follow any responses to this entry through the RSS 2.0 feed. You can leave a response, or trackback from your own site.