“For this child I prayed”

1 and 2 Samuel form one book in the ancient Hebrew manuscripts. They were not divided into two books until the Old Testament was translated into Greek. We don’t know who wrote the books; certainly, Samuel was a major contributor, but much of the book takes place after his death in 1 Samuel 25. They are called the books of 1 and 2 Samuel, not because Samuel wrote all of them, but because they describe his great ministry in Israel and the legacy of it.

There was a certain man of Ramathaim, a Zuphite from the hill country of Ephraim, whose name was Elkanah son of Jeroham son of Elihu son of Tohu son of Zuph, an Ephraimite. 2He had two wives; the name of the one was Hannah, and the name of the other Peninnah. Peninnah had children, but Hannah had no children.

3Now this man used to go up year by year from his town to worship and to sacrifice to the Lord of hosts at Shiloh, where the two sons of Eli, Hophni and Phinehas, were priests of the Lord.

The tabernacle (Tent of Meeting) was located at Shiloh, the religious center of the nation, as is clear from Joshua 18:1 — “The whole assembly of the Israelites gathered at Shiloh, and set up the Tent of Meeting there.”  Here is where sacrifices were made and worship was conducted. Eli’s sons, we will learn in chapter 2, are wicked priests. But Elkanah performed his religious duties out of obedience to God regardless.

4On the day when Elkanah sacrificed, he would give portions to his wife Peninnah and to all her sons and daughters; 5but to Hannah he gave a double portion, because he loved her, though the Lord had closed her womb. 6Her rival used to provoke her severely, to irritate her, because the Lord had closed her womb. 7So it went on year by year; as often as she went up to the house of the Lord, she used to provoke her. Therefore Hannah wept and would not eat. 8Her husband Elkanah said to her, “Hannah, why do you weep? Why do you not eat? Why is your heart sad? Am I not more to you than ten sons?”

The women said to Naomi: “Praise be to the LORD, who this day has not left you without a kinsman-redeemer. May he become famous throughout Israel!  He will renew your life and sustain you in your old age. For your daughter-in-law, who loves you and who is better to you than seven sons, has given him birth.”

9After they had eaten and drunk at Shiloh, Hannah rose and presented herself before the Lord.

Now Eli the priest was sitting on the seat beside the doorpost of the temple of the Lord. 10She was deeply distressed and prayed to the Lord, and wept bitterly. 11She made this vow: “O Lord of hosts, if only you will look on the misery of your servant, and remember me, and not forget your servant, but will give to your servant a male child, then I will set him before you as a nazirite until the day of his death. He shall drink neither wine nor intoxicants, and no razor shall touch his head.”

According to Numbers 6, the vow of a Nazirite included the following:

12As she continued praying before the Lord, Eli observed her mouth. 13Hannah was praying silently; only her lips moved, but her voice was not heard; therefore Eli thought she was drunk. 14So Eli said to her, “How long will you make a drunken spectacle of yourself? Put away your wine.”

15But Hannah answered, “No, my lord, I am a woman deeply troubled; I have drunk neither wine nor strong drink, but I have been pouring out my soul before the Lord. 16Do not regard your servant as a worthless woman, for I have been speaking out of my great anxiety and vexation all this time.”

17Then Eli answered, “Go in peace; the God of Israel grant the petition you have made to him.”

18And she said, “Let your servant find favor in your sight.”

Then she said to Boaz, “Let me find favor in your sight, my lord; for you have comforted me, and have spoken kindly to your maidservant, though I am not like one of your maidservants.”

Then the woman went to her quarters, ate and drank with her husband, and her countenance was sad no longer.

Eli misunderstood Hannah, but she was not offended. There isn’t anything huffy in her reply. Haven’t we sometimes been quite unlike Hannah in this? Perhaps there wasn’t a misunderstanding at all and yet we took offense. Perhaps there was, and we were angry. Hannah sets a splendid example to us all. Never take offense. Always believe the best.

After Hannah had prayed, her countenance was no longer sad. That is what always should be—but is it? Do we not sometimes wait to see the answer to our prayer before letting go of the trouble? Hannah didn’t do that.  Long before she saw the answer to her prayer, she so completely let go of the trouble that there wasn’t a trace of it on her face.

HERE  is one of the most well-loved hymns of all. “What a Friend We Have in Jesus” encourages us to take all our burdens and requests to the Lord in prayer, just as Hannah did!

19They rose early in the morning and worshiped before the Lord; then they went back to their house at Ramah. Elkanah knew his wife Hannah, and the Lord remembered her. 20In due time Hannah conceived and bore a son.

The Lord “remembered” Hannah. This is not to mean that at some point the Lord had forgotten her. No, rather the Hebrew word carries the idea of an action: The Lord did something to display his thinking of her. And it didn’t happen right away. Hannah had reason enough to be discouraged, but when the promise of God was spoken she did not lose faith in the promise, even when it took some time. She is a great example of those who through faith and patience inherit the promises (Hebrews 6:12). So the Lord remembered her faithfulness and she remembered God’s promise!

She named him Samuel, for she said, “I have asked him of the Lord.”

The name Samuel means, in Hebrew, “heard of God” or “name of God.”

21The man Elkanah and all his household went up to offer to the Lord the yearly sacrifice, and to pay his vow. 22But Hannah did not go up, for she said to her husband, “As soon as the child is weaned, I will bring him, that he may appear in the presence of the Lord, and remain there forever; I will offer him as a nazirite for all time.”

23Her husband Elkanah said to her, “Do what seems best to you, wait until you have weaned him; only—may the Lord establish his word.” So the woman remained and nursed her son, until she weaned him. 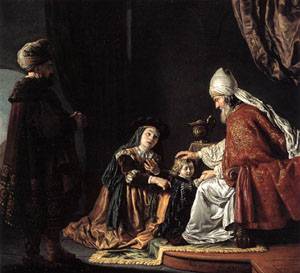 24When she had weaned him (typically at age 3), she took him up with her, along with a three-year-old bull, an ephah of flour, and a skin of wine. She brought him to the house of the Lord at Shiloh; and the child was young. 25Then they slaughtered the bull, and they brought the child to Eli. 26And she said, “Oh, my lord! As you live, my lord, I am the woman who was standing here in your presence, praying to the Lord. 27For this child I prayed; and the Lord has granted me the petition that I made to him. 28Therefore I have lent him to the Lord; as long as he lives, he is given to the Lord.” She left him there for the Lord.

To worship the Lord as they leave their little boy there at the temple! They know the meaning of the phrase “a sacrifice of praise.”

Ruth and her new family.   https://dwellingintheword.files.wordpress.com/2010/08/ruth13-baby.jpg

This entry was posted on Tuesday, April 6th, 2021 at 2:00 AM and is filed under Bible. You can follow any responses to this entry through the RSS 2.0 feed. You can leave a response, or trackback from your own site.