1 When Athaliah the mother of Ahaziah saw that her son was dead, she proceeded to destroy the whole royal family.

Athaliah was the daughter of wicked Ahab and Jezebel, and had been given to King Jehoram of Judah as a bride. Both her husband and her son were kings of Judah. New King Jehu had killed her mother and all of Ahab’s line, so Athaliah decided to return the favor and tried to kill all of David’s line.

2 But Jehosheba, the daughter of King Jehoram and sister of Ahaziah, took Joash son of Ahaziah and stole him away from among the royal princes, who were about to be murdered. She put him and his nurse in a bedroom to hide him from Athaliah; so he was not killed. 3 He remained hidden with his nurse at the temple of the LORD for six years while Athaliah ruled the land.

2 Chronicles 22:11 tells us that Jehosheba was the wife of Jehoiada, the high priest. Josephus says that the child and his nurse were hidden in a room where spare mattresses were kept!

4 In the seventh year Jehoiada sent for the commanders of units of a hundred, the Carites and the guards and had them brought to him at the temple of the LORD. He made a covenant with them and put them under oath at the temple of the LORD. Then he showed them the king’s son. 5 He commanded them, saying, “This is what you are to do: You who are in the three companies that are going on duty on the Sabbath—a third of you guarding the royal palace, 6 a third at the Sur Gate, and a third at the gate behind the guard, who take turns guarding the temple— 7 and you who are in the other two companies that normally go off Sabbath duty are all to guard the temple for the king. 8 Station yourselves around the king, each of you with weapon in hand. Anyone who approaches your ranks is to be put to death. Stay close to the king wherever he goes.”

Jehoiada chose the Sabbath for the day of the coup, because that was the day when the guards changed their shifts and they could assemble two groups of guards at the temple at the same time without attracting attention.
–David Guzik

9 The commanders of units of a hundred did just as Jehoiada the priest ordered. Each one took his men—those who were going on duty on the Sabbath and those who were going off duty—and came to Jehoiada the priest. 10 Then he gave the commanders the spears and shields that had belonged to King David and that were in the temple of the LORD. 11 The guards, each with weapon in hand, stationed themselves around the king—near the altar and the temple, from the south side to the north side of the temple.

12 Jehoiada brought out the king’s son and put the crown on him; he presented him with a copy of the covenant and proclaimed him king.

Deuteronomy 17:18 says that the king should have his own copy of the Scriptures, and here we see that Joash got his. This is also the basis for the British practice of presenting the monarch with a copy of the Bible during the coronation service.

They anointed him, and the people clapped their hands and shouted, “Long live the king!” 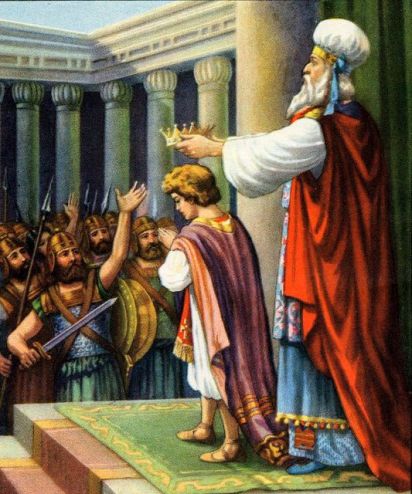 13 When Athaliah heard the noise made by the guards and the people, she went to the people at the temple of the LORD. 14 She looked and there was the king, standing by the pillar, as the custom was. The officers and the trumpeters were beside the king, and all the people of the land were rejoicing and blowing trumpets. Then Athaliah tore her robes and called out, “Treason! Treason!”

Remember, the new king is her own grandson!

15 Jehoiada the priest ordered the commanders of units of a hundred, who were in charge of the troops: “Bring her out between the ranks and put to the sword anyone who follows her.” For the priest had said, “She must not be put to death in the temple of the LORD.” 16 So they seized her as she reached the place where the horses enter the palace grounds, and there she was put to death.

Her epitaph could be similar to this one from the Old West:

“He had six bullets but he needed seven.”

OR perhaps something on this order:

Erected to the memory of

Drowned in the Waters of Leith

By a few affectionate friends.

“Here’s all we have to say about her–
The world is better off without her.”

Then Jehoiada the priest posted guards at the temple of the LORD. 19 He took with him the commanders of hundreds, the Carites, the guards and all the people of the land, and together they brought the king down from the temple of the LORD and went into the palace, entering by way of the gate of the guards. The king then took his place on the royal throne. 20 All the people of the land rejoiced, and the city was calm, because Athaliah had been slain with the sword at the palace.

21 Joash was seven years old when he began to reign.

The wolf shall dwell with the lamb,
and the leopard shall lie down with the young goat,
and the calf and the lion and the fattened calf together;
and a little child shall lead them.

HERE  is “I’m a Child of the King” sung by The Happy Goodmans. I just can’t help it! Every so often I have to have some good old gospel music — and who better than the Goodmans?

This entry was posted on Thursday, October 21st, 2021 at 2:00 AM and is filed under Bible. You can follow any responses to this entry through the RSS 2.0 feed. You can leave a response, or trackback from your own site.