As soon as King Hezekiah heard it, he tore his clothes and covered himself with sackcloth and went into the house of the Lord.

There was good reason for Hezekiah to be so humble before the Lord. “City after city has fallen to Sennacherib and long lines of deportees are already snaking their bitter way into exile — and it is all Hezekiah’s fault! He followed the lunatic policy of rebellion and was bewitched by Egyptian promises. He might as well have sold his people himself. But even when a matter is our own fault we can still pray about it. And the Lord can always be trusted to hear and help his people.”

2 And he sent Eliakim, who was over the household, and Shebna the secretary, and the senior priests, covered with sackcloth, to the prophet Isaiah the son of Amoz. 3 They said to him, “Thus says Hezekiah, ‘This day is a day of distress, of rebuke, and of disgrace; children have come to the point of birth, and there is no strength to bring them forth.

This was a proverbial expression for a disaster — a woman so exhausted by labor that she could not complete the birth, so it is likely that both mother and child will die.

5 When the servants of King Hezekiah came to Isaiah, 6 Isaiah said to them, “Say to your master, ‘Thus says the Lord: Do not be afraid because of the words that you have heard, with which the young men of the king of Assyria have reviled me. 7 Behold, I will put a spirit in him, so that he shall hear a rumor and return to his own land, and I will make him fall by the sword in his own land.’”

How these words must have cheered Hezekiah! Before, he had hoped it may be that the Lord your God will hear the words of the Rabshakeh . . . to reproach the living God (verse 4 above). He knew that their only hope was that God would take offense at the blasphemies of Rabshakeh and rise up against him. Now, the Lord speaks through the prophet Isaiah, saying He has indeed heard these words! Now, God is taking it personally!

8 The Rabshakeh returned, and found the king of Assyria fighting against Libnah, for he had heard that the king had left Lachish. 9 Now the king heard concerning Tirhakah king of Cush, “He has set out to fight against you.” And when he heard it, he sent messengers to Hezekiah, saying, 10 “Thus shall you speak to Hezekiah king of Judah: ‘Do not let your God in whom you trust deceive you by promising that Jerusalem will not be given into the hand of the king of Assyria. 11 Behold, you have heard what the kings of Assyria have done to all lands, devoting them to destruction. And shall you be delivered? 12 Have the gods of the nations delivered them, the nations that my fathers destroyed, Gozan, Haran, Rezeph, and the people of Eden who were in Telassar? 13 Where is the king of Hamath, the king of Arpad, the king of the city of Sepharvaim, the king of Hena, or the king of Ivvah?’”

We know of people like the Rabshakeh! They blabber on and on, thinking their words are accomplishing their purposes, when really they are just adding fuel to the fire of their own destruction. Lord, give me ears to hear the truth of what I am saying, especially when I am speaking unkindly of others or disrespectfully of you.

14 Hezekiah received the letter from the hand of the messengers, and read it; and Hezekiah went up to the house of the Lord, and spread it before the Lord. 15 And Hezekiah prayed to the Lord: 16 “O Lord of hosts, God of Israel, enthroned above the cherubim, you are the God, you alone, of all the kingdoms of the earth; you have made heaven and earth. 17 Incline your ear, O Lord, and hear; open your eyes, O Lord, and see; and hear all the words of Sennacherib, which he has sent to mock the living God. 18 Truly, O Lord, the kings of Assyria have laid waste all the nations and their lands, 19 and have cast their gods into the fire. For they were no gods, but the work of men’s hands, wood and stone. Therefore they were destroyed. 20 So now, O Lord our God, save us from his hand, that all the kingdoms of the earth may know that you alone are the Lord.”

Hezekiah responds rightly. He takes his problem to the Lord, and praises God for his power and wisdom. He contrasts the living God with their gods of wood and stone. And he leaves the situation in the Lord’s hands.

–a glorious answer to Hezekiah’s prayer!

21 Then Isaiah the son of Amoz sent to Hezekiah, saying, “Thus says the Lord, the God of Israel: Because you have prayed to me concerning Sennacherib king of Assyria, 22 this is the word that the Lord has spoken concerning him:

“‘She despises you, she scorns you—
the virgin daughter of Zion;
she wags her head behind you—
the daughter of Jerusalem.

The idea is that the Assyrians have come to ravish the “daughter of Zion,” the city of Jerusalem. But God won’t allow it.

23 “‘Whom have you mocked and reviled?
Against whom have you raised your voice
and lifted your eyes to the heights?
Against the Holy One of Israel!
24 By your servants you have mocked the Lord,
and you have said, With my many chariots
I have gone up the heights of the mountains,
to the far recesses of Lebanon,
to cut down its tallest cedars,
its choicest cypresses,
to come to its remotest height,
its most fruitful forest.
25 I dug wells
and drank waters,
to dry up with the sole of my foot
all the streams of Egypt.

26 “‘Have you not heard
that I determined it long ago?
I planned from days of old
what now I bring to pass,
that you should make fortified cities
crash into heaps of ruins,
27 while their inhabitants, shorn of strength,
are dismayed and confounded,
and have become like plants of the field
and like tender grass,
like grass on the housetops,
blighted before it is grown.

How humbling this must have been for the Assyrians! All along, they thought it was because of their mighty power they had accomplished so much. Here, God makes it plain that it was His power that did it.

28 “‘I know your sitting down
and your going out and coming in,
and your raging against me.
29 Because you have raged against me
and your complacency has come to my ears,
I will put my hook in your nose
and my bit in your mouth,
and I will turn you back on the way
by which you came.’

30 “And this shall be the sign for you: this year you shall eat what grows of itself, and in the second year what springs from that. Then in the third year sow and reap, and plant vineyards, and eat their fruit. 31 And the surviving remnant of the house of Judah shall again take root downward and bear fruit upward. 32 For out of Jerusalem shall go a remnant, and out of Mount Zion a band of survivors. The zeal of the Lord of hosts will do this.

33 “Therefore thus says the Lord concerning the king of Assyria: He shall not come into this city or shoot an arrow there or come before it with a shield or cast up a siege mound against it. 34 By the way that he came, by the same he shall return, and he shall not come into this city, declares the Lord. 35 For I will defend this city to save it, for my own sake and for the sake of my servant David.” 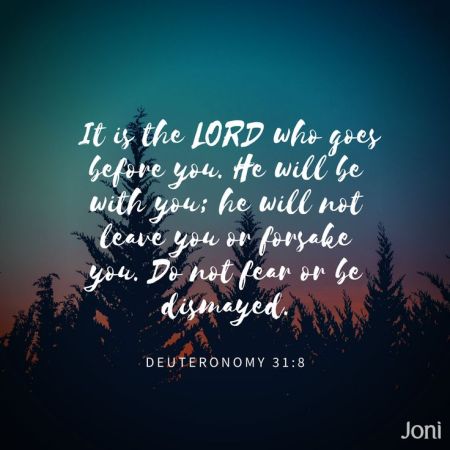 36 And the angel of the Lord went out and struck down 185,000 in the camp of the Assyrians. And when people arose early in the morning, behold, these were all dead bodies. 37 Then Sennacherib king of Assyria departed and returned home and lived at Nineveh.

“The Biblical account concludes with the much debated statement that the Assyrian army was struck down in some way during the night with considerable loss of life, following which the siege was called off . . . The Assyrian Annals tacitly agree with the Biblical version by making no claim that Jerusalem was taken, only describing tribute from Hezekiah.”  — from T.C. Mitchell, The Bible in the British Museum 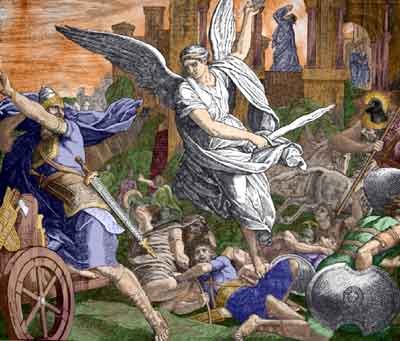 The Destruction of Sennacherib

(A critic has written that Byron’s diction and rhythm in the poem “drive home the concept of swift visitation and inevitable doom.”)

The Assyrian came down like the wolf on the fold,
And his cohorts were gleaming in purple and gold;
And the sheen of their spears was like stars on the sea
When the blue wave rolls nightly on deep Galilee.

For the Angel of Death spread his wings on the blast,
And breathed in the face of the foe as he passed;
And the eyes of the sleepers waxed deadly and chill,
And their hearts but once heaved, and for ever grew still.

And there lay the steed with his nostril all wide,
But through it there rolled not the breath of his pride:
And the foam of his gasping lay white on the turf,
And cold as the spray of the rock-beating surf.

And there lay the rider distorted and pale,
With the dew on his brow and the rust on his mail;
And the tents were all silent, the banners alone,
The lances unlifted, the trumpets unblown.

And the widows of Ashur are loud in their wail,
And the idols are broke in the temple of Baal;
And the might of the Gentile, unsmote by the sword,
Hath melted like snow in the glance of the Lord!

38 And as he was worshiping in the house of Nisroch his god, Adrammelech and Sharezer, his sons, struck him down with the sword. And after they escaped into the land of Ararat, Esarhaddon his son reigned in his place.

An old Jewish legend — and nothing more than a legend — says how it was that Sennacherib’s sons came to kill him. Sennacherib was troubled at how God seemed to bless the Jews so much and tried to find out why. Someone told him it was because Abraham had loved God so much that he was willing to sacrifice his son to the LORD. Sennacherib thought he would be even more favored by God, and decided to kill two of his sons in sacrifice to the LORD, becoming even more blessed than Abraham and his descendants. But his two sons learned of the plan, and killed him before he could kill them, thus fulfilling the word of the LORD.

I am something of a Diane Bish fan — she is an organist extraordinaire! Here she is (in typical sparkles) with the Choir of Second Baptist Church of Houston and her arrangement of “Lead On, O King Eternal.” Click  HERE  to hear this performance.

Take heart; do not be afraid.    http://www.4catholiceducators.com/graphics/Mark6_50.jpg

spreads the letter before the Lord.    http://upload.wikimedia.org/wikipedia/commons/1/10/Book_of_Isaiah_Chapter_37-1_%28Bible_Illustrations_by_Sweet_Media%29.jpg

This entry was posted on Friday, September 30th, 2022 at 2:00 AM and is filed under Bible. You can follow any responses to this entry through the RSS 2.0 feed. You can leave a response, or trackback from your own site.